Driver gets tailgated by lorry out of Jurong West carpark, calls for stronger deterrence 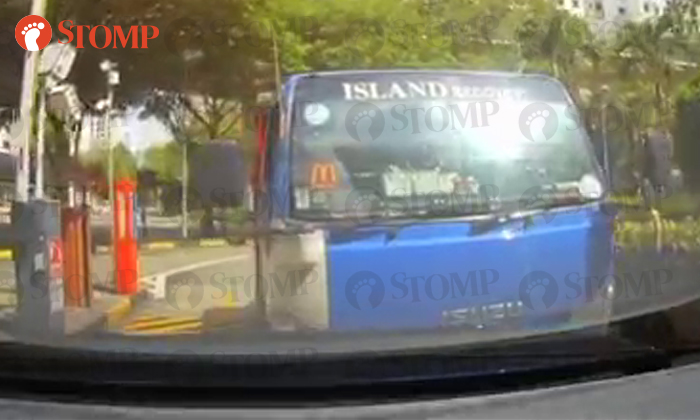 A lorry driver tried to evade parking fees by tailgating Stomper Desmond's car out of a multi-storey carpark in Jurong West on Saturday (Jan 18).

Desmond shared dashcam footage of the incident that occurred at Block 659 Jurong West Street 64 at around 11am.

In the video, a blue lorry can be seen following closely behind Desmond's car in the carpark and through the gantry.

Desmond, who has also shared the video with the authorities, told Stomp: "From the way the lorry driver did this, I can be sure it is not his first attempt at it.

"I feel that with the introduction of an increase in fines, and with cameras already installed at the entrances/exits of the carparks, if these offenders are still not deterred and continue to try their luck by performing such illegal acts, they should have stern action taken against them as stronger deterrence.

"I also hope this can be shared on social media via Stomp for awareness and to encourage others to come forward and report such illegal acts."

According to the Housing and Development Board (HDB) and Urban Redevelopment Authority (URA), around 4,400 notices are issued every year to motorists who evade parking charges by tailgating others or bypassing carpark gantries.

For this offence, motorcyclists face a $35 fine, while car drivers and heavy vehicle drivers face a fine of $70 and $100 respectively.