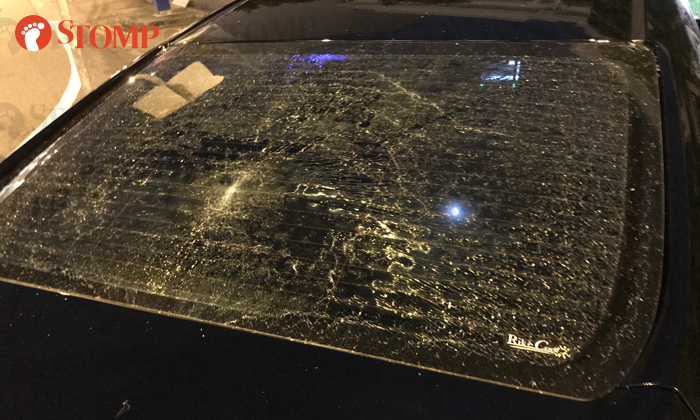 Stomper Benjamin parked his black Honda Civic at a carpark along Bukit Pasoh Road in Outram Park on Monday evening (Jan 1) and went to work -- then returned to find the vehicle badly damaged.

His car's rear windscreen and a brake light cover were smashed in, in addition to dents and scratches on the back bumper.

A signpost had also been hit and was left lying on the ground.

Benjamin is now appealing for video footage and witnesses to the hit-and-run incident.

Said the Stomper: "This occurred on Jan 1, between 5pm to 11.30pm, at Bukit Pasoh Road,  Carpark Number B0018. It's near Dorsett Hotel and Outram Park MRT's exit.

"I had parked my car SLL8304R, a black Honda Civic, at the lot nearest to the edge with a 'stop' sign next to it while I was at work.

"When I returned to my vehicle, I noticed the rear windscreen had been smashed in. The rear left brake light cover was also smashed in, with some dents and scratches to the rear boot.

"The culprit did not leave any note or form of contact. Unfortunately, my in-car camera was not working at that time so I did not manage to spot the culprit.

"Thus, I am appealing for witnesses and dash-cam footage to help me on this, as I need to have videos of the accident for claiming of insurance against the irresponsible driver."