Driver arrested after goods on trailer hit flyover along AYE 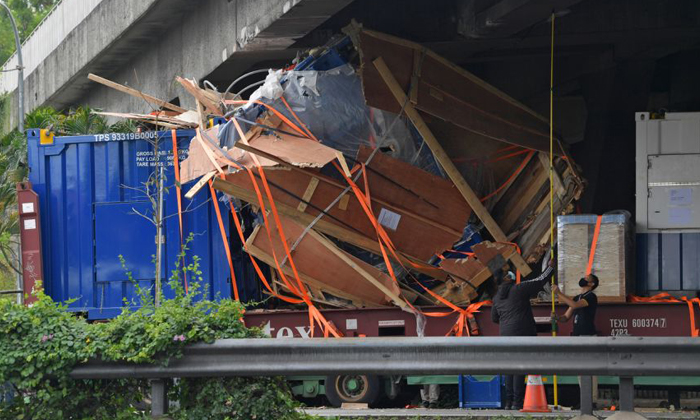 A 45-year-old man who was driving a trailer lorry was arrested after goods on the trailer hit a 4.5m-high flyover as it passed underneath on the Ayer Rajah Expressway (AYE) on Monday (Jan 18).

The police said they were alerted to the accident at 7.07am. No injuries were reported.

The accident blocked all but one lane on the AYE towards the Marina Coastal Expressway after the Clementi Avenue 2 exit, causing congestion for hours.

The Straits Times understands that the stretch was progressively reopened and all lanes were open again by 5.30pm.

Mr Lau Xuan Kai, a 27-year-old assistant video producer, said it took him more than two hours to travel from Jurong to Jalan Bukit Merah because of the jam.

"Three of the four lanes were closed and traffic came to a near standstill. My Grab car was moving at a pace of one to four km per hour and I was extremely late for work. Part of the film I was planning to shoot today had to be postponed," he said.

In response to queries from The Straits Times, the Land Transport Authority said the structural integrity of the flyover was not compromised and it remains safe for use.