Does this look like a TV or microwave to you? 'Outdated' assessment book sparks debate 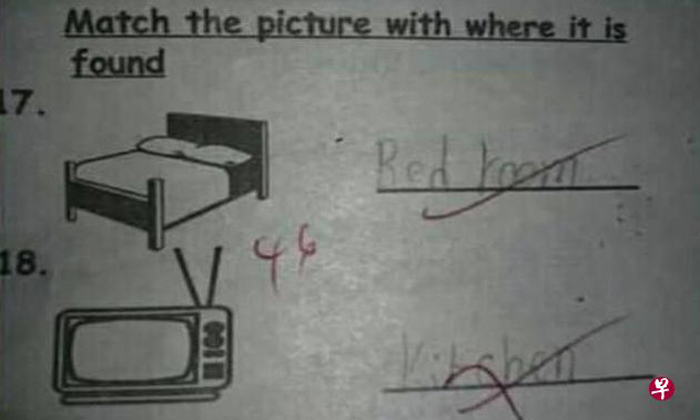 Mistakenly identifying a television set as a microwave, a student wrote that it can be found in the kitchen -- and had her answer marked wrong.

According to Shin Min Daily News, a netizen had posted a photo of her daughter's assignment online.

The assignment asked students to match pictures of items to where each item can be found.

While the neitzen's daughter correctly answered that a bed was found in the bedroom, she had another question marked wrong because she mistook a television set for a microwave.

The netizen wrote: "Could we please start drawing new-age applicances? My daughter has never seen such a TV. She thought it was a microwave."

This is because the picture showed an old-school television set with antenna instead of the modern liquid-crystal-display (LCD) models that we now see everywhere.

When Shin Min reporters looked through five to six assessment books for kindergarten and primary school students, they came across many old-fashioned drawings of radio sets and other household items that are considered rare today.

Ms Huang, who has a seven-year-old daughter, said that children would find it hard to identify with outdated assessment books like this one.

The 37-year-old parent added: "For instance, they would not have much interaction with radios and landlines, and they definitely would not have seen an old-school television set before, which makes it hard for them to recognise the items."

However, others felt that sharing the history of these old applicances with children would be educational for them.

Related Stories
Error-filled poster offering tuition gets schooled instead at Ang Mo Kio
Can you spot all the grammar mistakes on this poster for English tuition?
Does this look like '3' or '9' to you? Carouseller sends parcel to wrong address after getting this pic from buyer
More About:
unusual
student
school
child
tuition