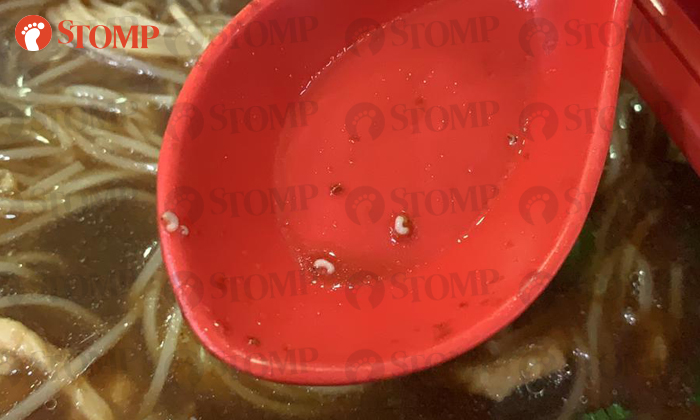 Stomper Wang and her friends were dining at Seng Kee Black Chicken Herbal Soup last Friday night (Aug 16) when they discovered many "U-shaped white stuff" in their mee sua.

The group of five, who visited the Changi Road eatery at around 9pm, were shocked when they realised that the foreign objects in their food were actually worms.

In a video that she sent to Stomp, white worms can be seen floating in a bowl of mee sua soup.

Wang recounted: "One of my friends noticed many U-shaped white stuff in his soup when he had eaten about half the portion.

"He asked us if it was just his bowl that had it or if it was the same for everyone else.

"After some debate, we realised that all of us had the same stuff in our individual bowls.

"Still in disbelief thinking that it might just be part of the soup broth, we picked up a few spoonfuls to scrutinise before we realised that the U-shaped particles had eyes and legs."

The group then asked a staff member if the white particles were worms.

Wang said: "After a short discussion between them, the staff came back and told us that ya it was and that it was the mee sua’s problem.

"Most of us were already halfway through our food and they asked if we would like to order something else as long it was not mee sua instead of offering a refund.

"We declined, as we were worried that the worms might have been from the meat as well and that the kitchen might have already been infested."

Wang and her friends were then given a refund. They left after taking some photos. 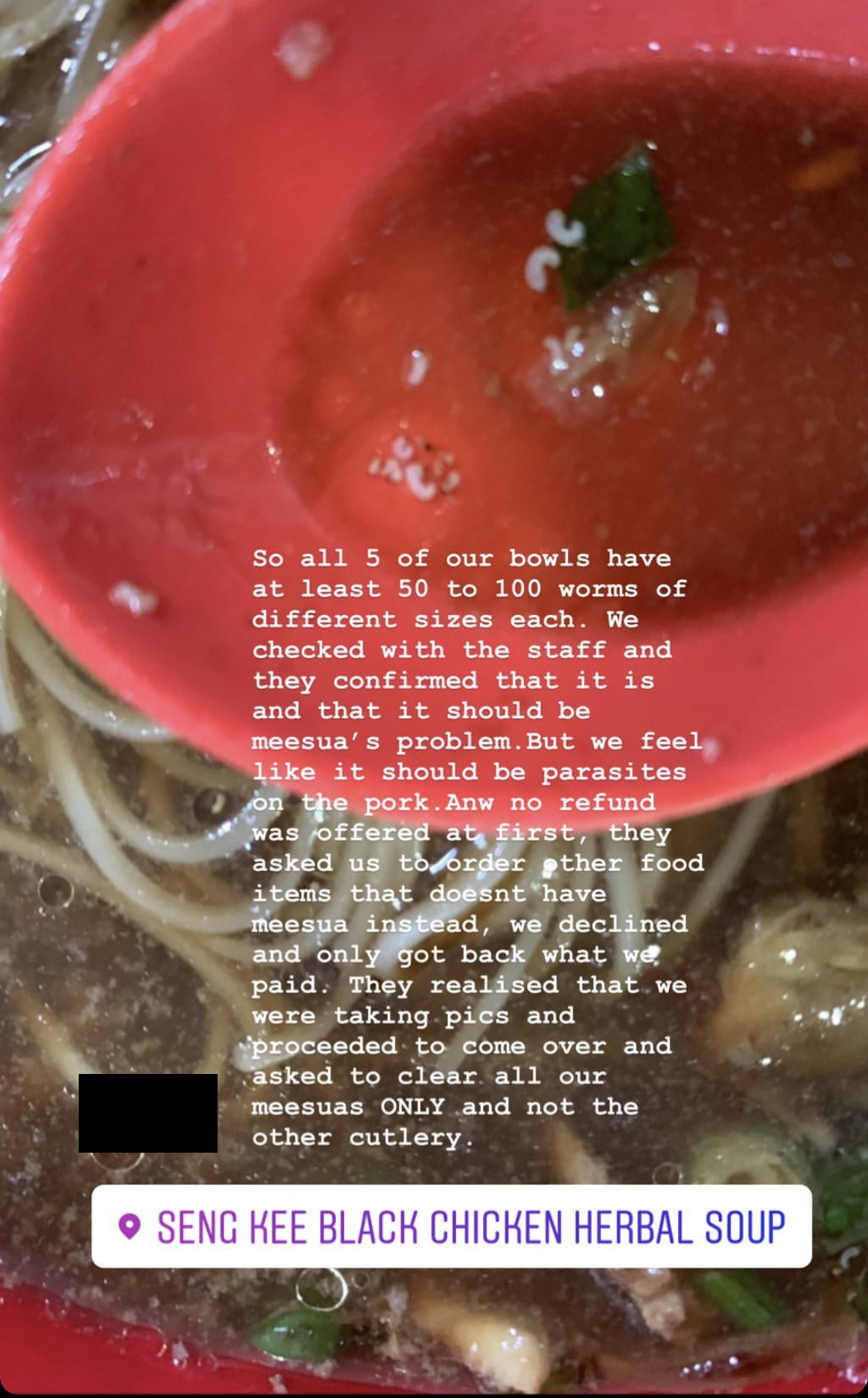 The Stomper also posted about the incident on Instagram, and said that "50 to 100 worms of different sizes" were found in each bowl of mee sua.

According to Shin Min Daily News, someone from the group had diarrhoea the following day (Aug 17) and the Singapore Food Agency (SFA) has been informed of the incident.

When contacted by Shin Min, eatery boss Li Tianfu, 49, said that staff did not notice the white particles during the cooking process.

The shop immediately halted sales of the mee sua after being alerted to what happened.

Mr Li added: "I asked my staff to inspect all the mee sua.

"In cases like this, we will definitely take full responsibility as well as provide the other party with my name and contact details. If they do not feel well, we will also reimburse their medical expenses."

According to Mr Li, suppliers had recommended the brand of mee sua in question. The shop had been using it for less than a month and have since returned the problematic batch.

A spokesman for the supplier told Shin Min that the flour worms might have appeared during the manufacturing process and steps were immediately taken.

The affected batch has since been destroyed.

Mr Li said that upon learning of the incident, he immediately rushed to six supermarkets to buy 50 new packets of mee sua.

He had driven to nearby supermarkets as the incident occurred when his shop was the busiest.

"Taking food safety into account, we stopped selling mee sua for one hour and made a loss of about $580. The replacement mee sua was also three times higher than the cost price," he shared.

Following the incident, Mr Li requested his staff to be more alert during the cooking process and emphasised that there can be no repeat of such a thing.