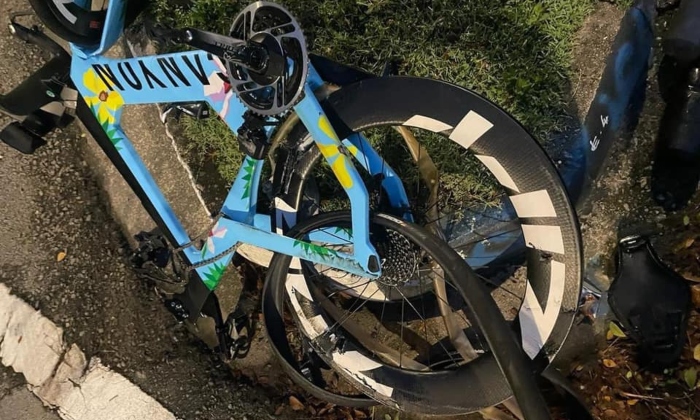 A 43-year-old male cyclist died after an alleged hit-and-run accident along Adam Road on Wednesday morning.

The police said they were alerted to an accident at 6.29am on Wednesday involving a car and a bicycle along Adam Road, towards Lornie Road, before the exit to the Pan-Island Expressway heading to Tuas.

The cyclist was unconscious when he was taken to Tan Tock Seng Hospital, where he died, said the police and Singapore Civil Defence Force.

The police added that they are investigating two men, aged 38 and 40.

The Straits Times understands that one of the two men is the owner of the car, believed to be a white Mercedes, and the other is his acquaintance.

The cyclist was a member of the Australian and New Zealand Association (Anza) Cycling club.

A message was posted on the club’s Instagram Stories at around noon. It read: “Dear Anza Cycling community. We are aware of an incident that occurred this morning, in which an Anza cyclist, part of our triathlon community, has passed away.

“We are working to find out more information, but for now, out of respect for his family, we urge you to not share photos or conjecture about the incident.” It was signed off by the Anza Cycling Committee.

Responding to queries from ST, a spokesman for Anza said that discussions were being held by the committee following the tragic accident.

There were more fatalities resulting from traffic accidents in 2021, the police said in February this year, with 100 killed last year, compared with 80 in 2020, an increase of 25 per cent.

In January, Minister for Transport S. Iswaran said in Parliament that over the past five years, an average of about 560 serious accidents involving cyclists on roads have been recorded yearly.