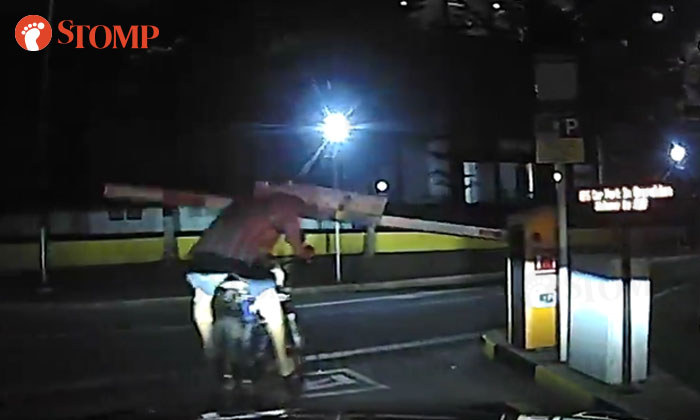 Not only do drivers have to look out for other motorists, they need to keep an eye out for cyclists, personal mobility device (PMD) users and pedestrians as well.

Stomper Superflyguy encountered a cyclist who cut in front of him as he was about to enter a carpark in Ang Mo Kio in the early hours of Saturday morning (Oct 12).

"I was about to enter a carpark in Ang Mo Kio when this reckless cyclist dashed in front of me from the left forcing me to brake hard to avoid him," said the Stomper.

"Next thing I knew, he collided into the closing gantry arm while attempting to shortcut his way out of there via the gantry entrance.

The Stomper noted that the cyclist had beat a red traffic light before getting hit by the gantry arm.

"When I replayed the video, I realised that he had actually started his rash acts even earlier than this while I was waiting to make a U-turn at the junction," he said.

"The crossing lights on his side could be seen turning red before he started recklessly dashing across the road, beating the red lights, then the zebra crossing before finally romancing the gantry.

"This blatantly reckless rider is a potentially serious hazard to pedestrians and road users alike and must be publicly exposed for his reckless behaviour."