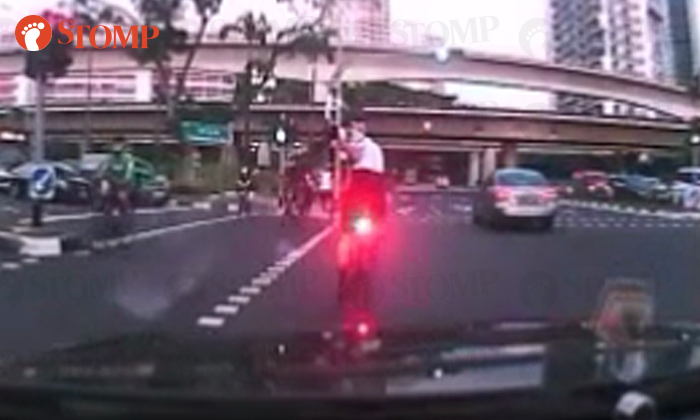 A cyclist was caught on camera flashing his middle finger after getting honked at for making an abrupt stop while riding off from a traffic junction.

Stomper Peng Ying shared a video of the incident that occurred along Boon Lay Way on Saturday (July 3), at around 6.55pm.

Peng Ying recounted: "I was waiting at a traffic junction when this cyclist came from the right side of my vehicle and stopped in front on the dotted line meant as boundary for pedestrians crossing the road.

"When he was honked at for suddenly stopping after moving off when the traffic lights changed, he showed his middle finger.

"I feel angry because there are no vehicles behind me but the cyclist chose to cut in front of my vehicle and expected me to follow behind him.

"After the traffic light turned green, he chose to stop suddenly, which is very dangerous. He was also very rude to show his middle finger.

"Personally, I am not against cyclists on the road but definitely not when it comes to this type of cyclists who do not respect other road users."

Related Stories
Cyclist shows middle finger after getting honked at along Upper Thomson Road
Police called in after biker refuses to give way to pedestrian then points middle finger at her
Driver abruptly jams on brakes at Yew Tee junction, flashes middle finger when honked at
More About:
cyclist
middle finger
road rage
reckless driving