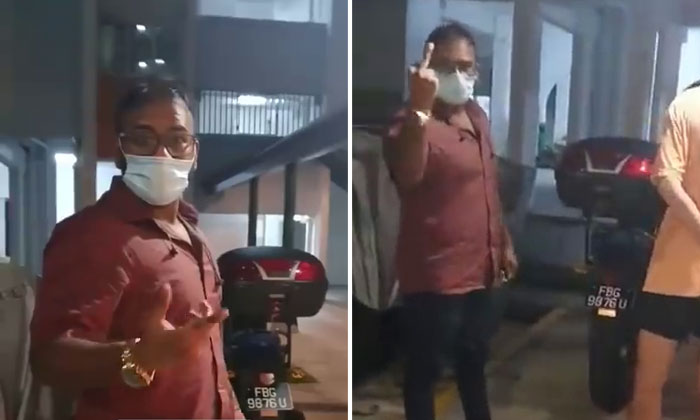 The police were called in after a dispute arose between a motorcyclist and a pedestrian at Block 671 Hougang Avenue 8 on Wednesday evening (June 9).

Stompers alerted Stomp to a video of the incident that was posted on SG Road Vigilante's YouTube page.

In the video, a woman is heard speaking while recording two men standing in front of a motorcycle.

She pans her camera to show that the pedestrian walkway is cordoned off and that the only way to get through is from the side.

However, she says that the biker has blocked access for pedestrians by parking his motorcycle there.

She said that there is "no other way" to get through and accuses him and his companion of being impolite and rude.

"Because it is so narrow, I told them 'excuse me', they said 'five minutes'," she said.

"So I walked through the narrow walkway and my box hit his bike and he said, 'what happens if my bike is damaged."

In the video, she shows that her box is empty and could not have caused any damage.

"I don't know what this guy is trying to say," she continues.

"I am very unhappy about it because they are so rude to me.

The man then points his middle finger at her to which she replies, "Ah good! Thank you!"

In response to a Stomp query, the police were alerted to a case of intentional harassment at Block 671 Hougang Avenue 8.

"Police have advised the complainants on their legal recourse," he said.