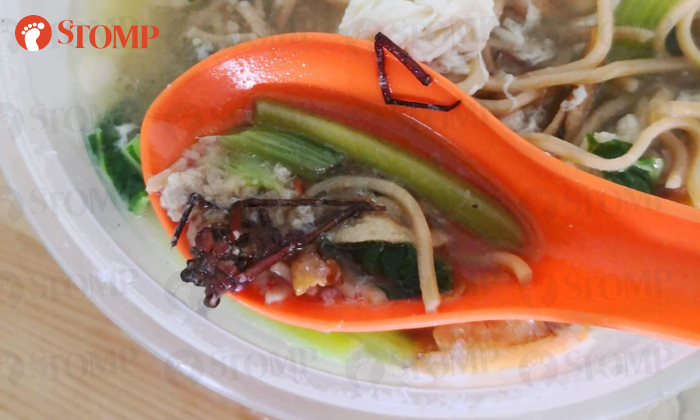 A customer has refuted claims by the owner of a ban mian stall who said that the cockroach he found in his noodles might have been a dried squid.

Stomper Tan earlier shared how he had found a cockroach in his Foodpanda order from Taste Beyond Taste Ban Mian & Fish Soup at Block 156 Yishun Street 11 on December 5.

He reported the matter to the Singapore Food Agency (SFA) on the same day.

In a Stomp report on December 11, Tan said he felt unwell, uncomfortable and traumatised after the incident, which led him to stay in his room without food for the rest of the day.

The SFA told Stomp that it did not detect any infringements of our food safety and hygiene requirements during its inspection of the stall.

A nearby vendor said that the owner of the ban mian stall, a young woman, had ceased operations since December 8.

The vendor, who declined to be named, also said that the ban mian stall has always been neat and tidy as the stall owner cleaned it every day.

When contacted by Shin Min over the phone, the ban mian stall owner explained that her soup base is boiled using dried squid and that the customer might have mistaken it for a cockroach.

She added: "If the customer can clarify properly that it is really a cockroach, I am willing to apologise to him."

The stall owner also admitted that she felt discouraged by flak over the incident, which led her to ending her contract with the coffee shop owner prematurely.

"I'm taking it as a break before finding other job opportunities to make ends meet," she said.

Responding to the stall owner's claims, Tan told Stomp: "I had confirmed that it was a cockroach before informing the SFA.

"Yes, I saw news reports everywhere with the headline that the stall owner lost heart in her business due to me 'misunderstanding' the dried squid.

"Not only is this misleading, netizens are leaving comments to make fun and scold me for not letting the matter rest."

Tan also noted how he had stated in his original report that his intention was to raise awareness about food hygiene and not to blame the stall.

He said: "I am tired of this news. Even publications in Malaysia are reporting it.

"The focus has shifted to why the customer is being so petty over one cockroach. But even worse is how the stall owner now claims it is not a cockroach."

Tan added that he has nothing further to say on the matter and asked to be left alone, adding: "Cyberbullies are everywhere now."