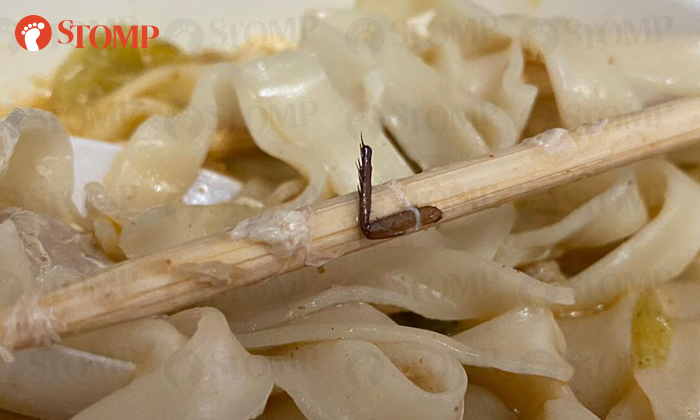 A woman was left disgusted after finding a cockroach leg in her ban mian halfway through her meal earlier this month.

She recounted: "I was about to have my second mouthful when I saw an insect leg, presumably from a cockroach, in the soup.

"I felt really disgusted and disposed of both bowls of noodles that I had gotten from the same stall. What terrible hygiene!

"I filed a complaint with the delivery app but they only provided a refund for one of the items I bought, which I felt was quite unreasonable as both food items were prepared in the same kitchen with the same equipment.

"Obviously, no one would continue to consume any other food from the same stall knowing that a cockroach leg has been found in one item."

In response to a Stomp query, the Singapore Food Agency (SFA) said it inspected the stall upon receiving feedback about the matter.

An SFA spokesman told Stomp: "We did not detect any infringements of our food safety and hygiene requirements during inspection.

"Nonetheless, we have advised the licensee to keep the premises clean and free from pest infestation at all times.

"Food safety is a joint responsibility. While SFA puts in place and enforces the regulatory measures, food operators must play their part by adhering to good food hygiene and preparation practices."

Members of the public who come across any potentially errant food operator can make a report to SFA via its online feedback form.

As part of the enquiry and gathering of evidence, SFA may engage the feedback provider for more details.

"SFA will not hesitate to take enforcement action against errant food handlers if we have obtained sufficient evidence," the spokesman added.