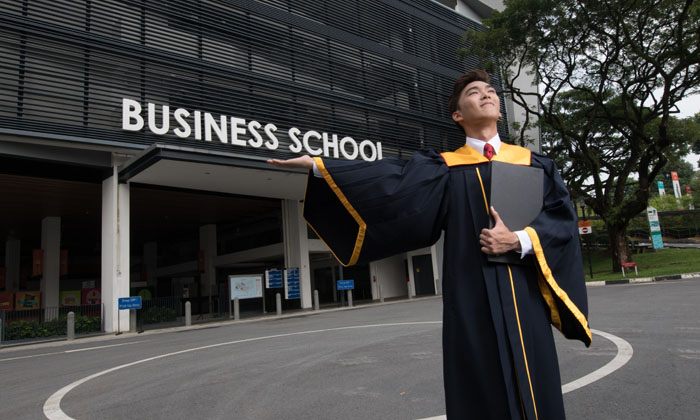 Charting his path to the Big 4

Bad results landed Yu Yang in the worst Normal Academic class of his secondary school. He scored badly for every subject except Mathematics.

When Yu Yang was given the opportunity to take Express Stream Mathematics, the Manjusri Secondary alumnus knew that numbers were his calling.

Yu Yang was among the top 10% of the G.C.E ‘N’ Levels examinations and enrolled in Singapore Polytechnic (SP)’s Diploma in Accountancy through the Polytechnic Foundation Programme.

In SP, Yu Yang excelled in his studies and was awarded the SP Scholarship in his second and third year. He never failed to challenge his boundaries and participated in various events.

Besides representing SP in a study trip to China, Yu Yang also chaired a committee on human trafficking at the S Rajaratnam Endowment-Youth Model ASEAN Conference organised by SP.

He also had the opportunity to participate in the ICAEW Deloitte Business Case Challenge and NTU Audit and Accounting Challenge, where his team clinched third place for the latter. Yu Yang was recognised for his myriad of contributions with the SP Model Student Award.

A three-month internship stint at PricewaterhouseCoopers (PwC) allowed Yu Yang to apply the techniques and skills learnt in his course to real-life situations. For his excellent performance, he was awarded the PwC Outstanding Award for Whole Leadership.

Yu Yang was not only strong in his studies, but in handling his emotions as well. Unlike most teenagers who led a protected childhood, Yu Yang came from a low-income single-parent family and lived in a rental flat.

Instead of faltering, Yu Yang used this adversity to develop a diligent and resilient attitude towards studies and life. He even took up part-time jobs outside of school to lighten his mother’s financial load.

His background also allowed Yu Yang to resonate with the underprivileged. He participated in the Overseas Community Involvement Project to Indonesia, Yogyakarta, where he worked with local engineering students to improve the livelihood of local mushroom farmers.

Yu Yang also spearheaded the CCK Fei Yue Family Services Community Project where he led a team to raise funds for the refurbishment of the centre’s library and designed English lessons for Chinese speaking children.

Yu Yang is living proof that when the going gets tough, the tough gets going.

Related Stories
SP student determined to show parents that she could succeed -- and she did
SP graduate who won 5 prestigious awards now managing his own business
Look how far this top SP graduate has come since sec school and ITE
More About:
inspiring
student
talent
amazing people
Singapore Polytechnic