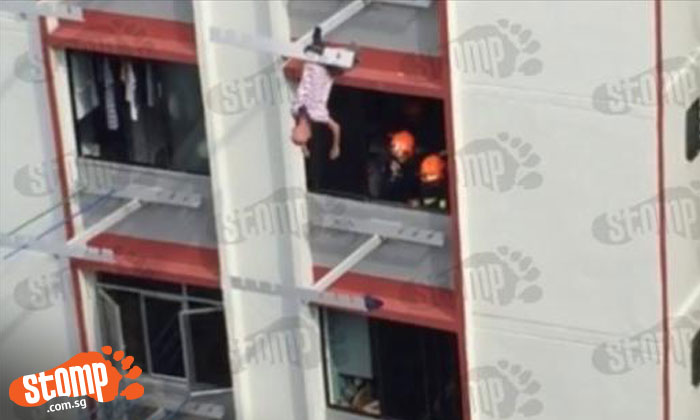 The fall from the 11th-storey window should have ended his life.

But a clothes rack on the eighth storey gave him a chance for a fresh start.

The 68-year-old man's clothes were snagged by the rack and rescuers saved him as he hung from it.

A Singapore Civil Defence Force (SCDF) spokesman said it received a call about a man hanging from a clothes rack at Block 410, Tampines St 41, at about 3.30pm yesterday.

"A man was brought to safety from the eighth floor by the SCDF using a combined platform ladder (CPL)," he said.

The CPL is a hydraulic ladder-platform used for high-rise operations.

"The man was taken to Changi General Hospital in a conscious and stable condition," said the spokesman.

The man's son, who wanted to be known only as Mr Sin, a 34-year-old luggage handler, said his father had fallen from the kitchen window yesterday when he was home alone.

"The police told me that his trousers got caught on the clothes rack as he fell," said Mr Sin.

"It was luck. I don't think he was hurt or suffered any injuries."

A police spokesman said the man was arrested for attempted suicide and that investigations were ongoing.

Residents in the area said they were not aware of what was going on and only saw the man being taken away in an ambulance at about 4.30pm.

Mr Sin said his father had always been quiet and the family was quite shocked when they received a call from the police.

"His only ailment is that he's hard of hearing. He seemed a bit depressed recently, but we were shocked he tried to jump," he said.

Mr Sin said his father was alone at home because Mr Sin, his mother and his brother were out working.

"My mother got the call from the police and then called me at about 5.30pm. I was already on the way home," he said.

"When we got home, we found the windows open, but there was no note or anything," said Mr Sin.

The police also took away a 1.5m metal ladder from the family home, believed to be used by the man to climb out the window.

Mr Sin said the family will be keeping an eye on his father.

"At least he is okay, but we'll now need to have at least one person at home to watch him when he gets back," he said.

Those who attempt suicide can be jailed for up to a year or fined, or both.

If you are having thoughts of suicide or are in emotional distress, you can get help from: