Deaths at Novena Suites condo: Couple's marriage on the rocks but they were planning China trip 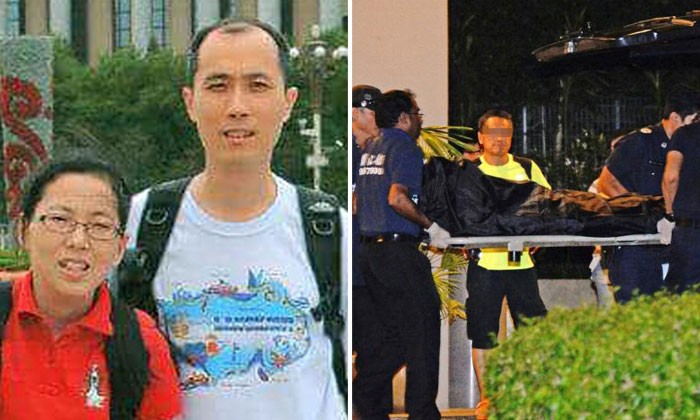 Their marriage was on the rocks.

While they and their two children would still go out for family outings, the couple had been living separately for four years.

Tragedy struck on Saturday night when Mr Wang Chan Foo, also known as Ongko Widjojo, 46, fell to his death from his balcony parapet at the Novena Suites condominium on Moulmein Road.

His wife, Madam Ng Soo San, 44, was later found dead by the police in his 13th-storey condominium unit.

She is believed to have suffered multiple stab wounds to her torso.

The episode unfolded while their daughter, 13, and seven-year-old son were at a nearby tuition centre, reported Chinese newspaper Lianhe Wanbao.

Ms Ng's brother, Mr Ng Jun Jie, 37, a tow-truck driver, told Shin Min Daily News that the two children had gone over to the condominium premises after their class and found out what happened to their father.

The girl, sobbing, then called her aunt - Mr Ng's older sister - for help.

"At that point, my niece said she was looking for her mother and could not find her," Mr Ng told Lianhe Wanbao.

Police said in a statement yesterday that they were alerted to the incident just before 7pm on Saturday.

It was only hours later that police found Madam Ng's body inside her husband's condominium unit, reported The Straits Times Online. Both Mr Wang and Madam Ng were pronounced dead at the scene, said the police.

A search on the Registry of Marriages website showed that the couple got married in 2003.

They owned a HDB flat at Toa Payoh Lorong 2, and rented a unit at the Novena Suites condominium.

But their relationship soured about four years ago, Mr Ng told Wanbao.

"My sister claimed her husband had hit her and so moved back to their Toa Payoh HDB flat with their children," he said.

Mr Wang, who came from a wealthy family in Indonesia, stayed at the rented condominium unit.

Mr Ng moved in with his sister and her children two years ago.

Despite living separately, Mr Wang and Madam Ng would still take their children along for family outings, he said.

They had even planned for a trip to China next month, Mr Ng told Shin Min.

He said he last saw his sister on Saturday morning as she was about to take her son for his swimming class.

The next time he heard news of her was from his older sister, who had received a call from their niece.

Mr Ng told reporters that everything happened so suddenly and that it left him hurt and shocked, adding he did not know why his sister had gone to the condominium.

The couple's children are currently being cared for by him and his older sister, he said.

No one answered the door when The New Paper visited the couple's Toa Payoh HDB flat yesterday evening.

Police are investigating the unnatural deaths.