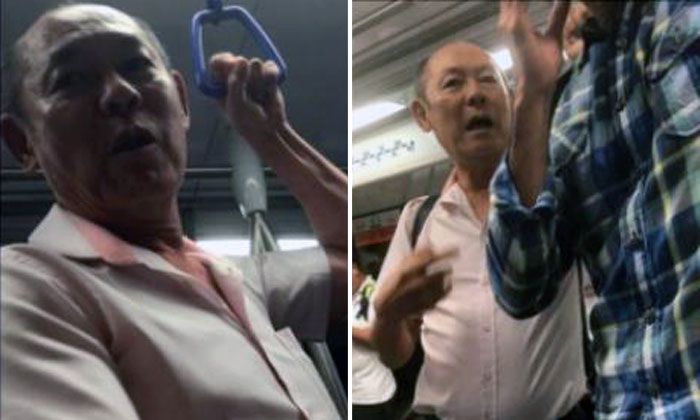 A 70-year-old man who shouted at and slapped a guy on a train has been arrested for causing public nuisance and voluntarily causing hurt.

Multiple Stompers alerted Stomp to the clip which was posted by Facebook user Joe DeMarini on Apr 20.

The incident reportedly happened on the North East Line on Wednesday (April 18) night.

Mr Demarini said the man appeared drunk and approached him and a friend.

He then repeatedly made sexual advances on him.

When Mr DeMarini's female friend intervened, the man allegedly yelled and threatened her.

Others on the train stepped in too, while several were taking videos, he said.

The police on Saturday (April 22) said they received a report on Friday (April 21) about a man repeatedly using offensive language and assaulting a commuter on an MRT train.

Officers from Ang Mo Kio Division identified the suspect and arrested him along Ang Mo Kio Avenue 1 on Friday at about 10pm.