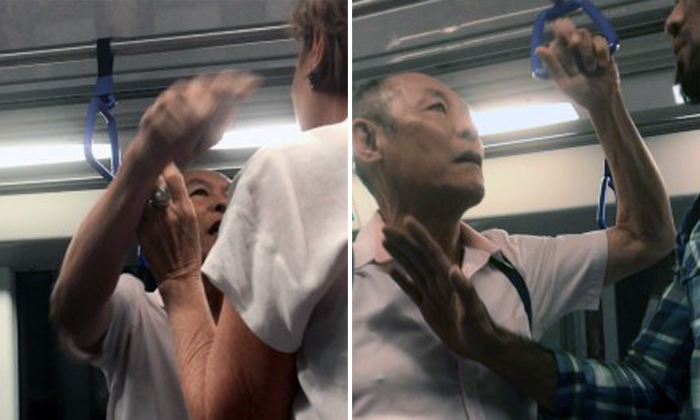 An elderly man was caught on video sexually harassing and slapping a man on an MRT train recently, until other commuters stepped in to stop him.

Multiple Stompers alerted Stomp to the clip which was posted by Facebook user Joe DeMarini on Apr 20.

Joe said in his post that he was travelling on the train with a female friend when the man started to sexually harass him.

He can be seen repeatedly making lewd remarks in the video, and gets angry when Joe's female friend tries to intervene.

A woman then steps up and tells the elderly man to calm down, and to stop harassing the man.

However, the man continues making lewd remarks, and threatens to kiss Joe.

Joe then loses his temper and threatens to punch the man, but the uncle slaps him on the side of the head instead.

This prompts the woman to yell at him to stop it, and a male commuter then tells the elderly man to not create a scene.

The elderly man, now seeing more commuters stepping up to defend Joe, backs away from him.

However, he continues to argue with the commuters while still passing lewd comments about Joe.

In his post, Joe said the man "kept going on and on, and when a woman tried to take his picture, he attempted to kick her phone out of her hand".

"When my friend and I got off at our stop, he got off as well, but we managed to evade him and leave the station without him following us."

Joe also added that he did not fight back as he felt that, being an immigrant he did not want to be accused of "inciting violence".

Joe also stated that he was so rattled at that point in time that he forgot to thank the commuters who defended him.

"I wish I'd said thank you to the train people who took a stand and put themselves between me and this man", said Joe.

"I wish I'd sat in a different train car, and the whole situation could've been avoided. Was it the V-neck I was wearing? My ripped skinny jeans?

"I probably should have held my temper, but that's not my character. Could I have found a way to peacefully diffuse the whole situation?

"It's obviously not my fault but, somehow, a part of me is convinced it was."

Stomp is checking with the police about this incident and will update with their response.