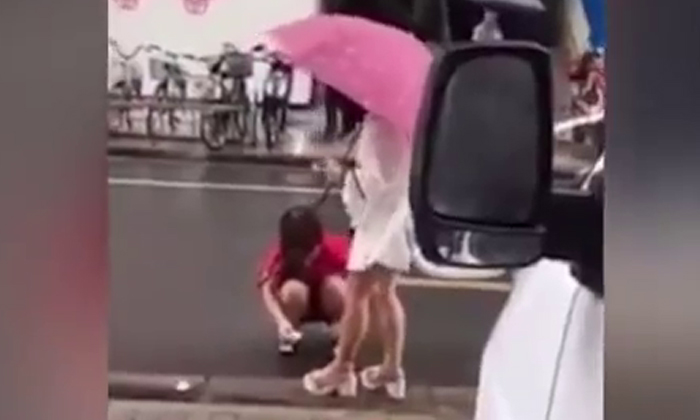 A video showing a middle-aged woman squatting down to clean her grown-up daughter's shoes in China has sparked a heated discussion online.

According to Kankanews, the incident took place along a street in Pu’an Road, Shanghai, on Sep 18.

In the video, a woman -- said to be in her 20s -- can be seen holding an umbrella while her mother used a tissue to wipe her shoes during wet weather.

Passers-by were further stunned when the well-dressed woman, who appeared unfazed by stares, shouted: "They’re not clean enough!" and "You are crazy, you hurt me!"

The pair then left together after the mother tossed the tissue by the roadside -- a fact that did not go unnoticed by netizens.

However, some have also called her a "victim of her mother's love" and blamed the older woman for over-indulging her.

Meanwhile, others pointed out that this was "normal" as she was wearing a dress, thus making it hard for her to bend down.

Related Stories
Chongqing man wears GF's high heels to ease her sore feet at hospital
Waitress shows how damaging heels can be after being made to wear a pair
Guangzhou woman pushes son towards oncoming van, does something even more epic after failing
More About:
controversy
China
parents