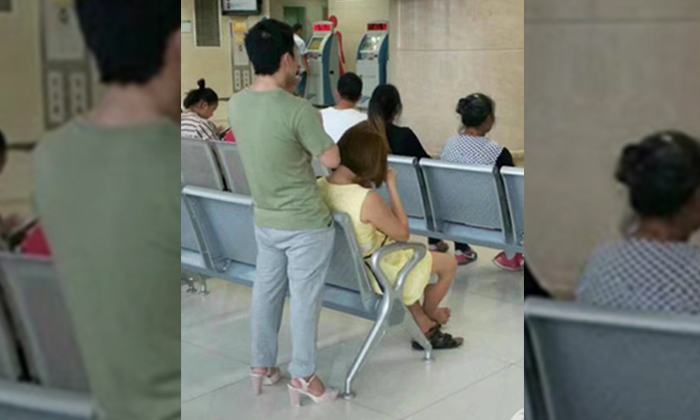 A man in Chongqing, China, has earned the admiration of netizens for exchanging footwear with his sick girlfriend in order to ease her discomfort.

According to Sohu News, the incident occurred on the fifth floor of Xinqiao Hospital in Shapingba District.

A female witness, identified as Xie, said the pink heels were what caught her attention and led her to photograph the couple.

She told Chongqing Morning News that the couple were already in each other's shoes when they arrived at the hospital.

The woman appeared to be in discomfort and her boyfriend affectionately patted her on the head a few times.

When she offered to swap their shoes, the man declined.

Photos of the couple have gone viral online, with netizens proclaiming that "this is what love looks like."

Some also pointed out how the boyfriend seemed totally at ease and speculated that this might not be the first time he has done something so sweet for the woman.

Related Stories
S'pore guy's story about his parents' love will tug at your heartstrings
Touching sight of elderly man helping wheelchair-bound wife cut her noodles will warm your heart
While others dine at 'atas' restaurants on V-Day, this couple shows you what true love is all about
More About:
romantic
couple
love
China
inspiring