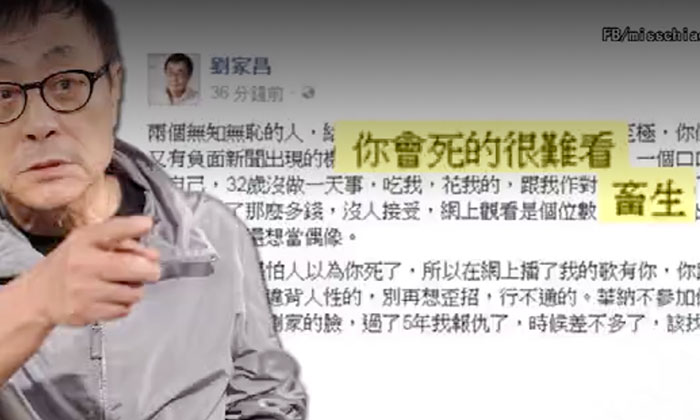 Widely lauded as the father of China’s music scene in the 20th century, the multitalented Liu Chia-Chang has recently been accused of domestic violence.

It is alleged that Liu deliberately sabotaged Jeremiah’s music career, and often beat him, reports Apple Daily and Lianhe Wanbao via Lianhe Zaobao.

During an interview, Jeremiah recalled an experience back when he was 10, when Liu kicked him right in front of celebrity Brigitte Lin at the American customs, after the boy’s attempt to import a bicycle caused a delay.

American officers were forced to draw their guns to stop his father, said Jeremiah.

She said that on one occasion, Liu had battered Jeremiah with a cigarette tray out of frustration, when he could not understand the new audio equipment which Jeremiah had bought.

Zhang further alleged that Lin was behind the termination of contract between Warner Music and Jeremiah.

Furthermore, Liu had recently posted a threat on Jeremiah’s Facebook page, threatening him with ‘a gruesome death’.

However, this was not the first time Liu had lashed out at Jeremiah on Facebook.

Prior to this, Liu had heaped insults upon Jeremiah on his own Facebook page, citing that he was a ‘beast’ and ‘good-for-nothing’.

“Only enemies would say this!”

“What did Jeremiah ever do to him?

“To scold him like this, I can’t stand it anymore.

“If he continues, we’re going to sue.”

After news of the abuse came to light, many netizens posted words of encouragement on Jeremiah's Facebook page.

"From the bottom of my heart, I can only say to you all, thank you for your support.

Related Stories
Nicholas Tse happy to oblige when every single air stewardess on flight wants to take photos with him
G.E.M to return to S'pore in August with a love message
Kim Kardashian says she is no longer materialistic after robbery: "It's not worth it"
More About:
entertainment
Liu Chia-Chang
domestic abuse