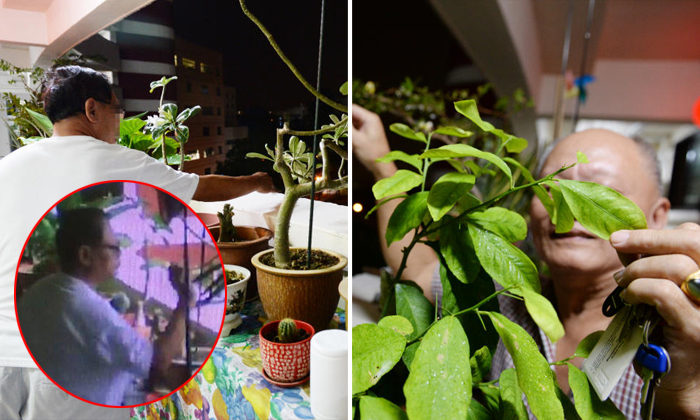 Stomper Richard complained about his neighbour who was caught on camera plucking the leaves on his plants at Block 59 Chai Chee Road -- but it turns out that the two men are actually biological brothers.

In a Stomp report on Sep 17, Richard shared footage showing someone whom he identified as his neighbour committing the act on the seventh storey of their block.

He told Stomp: "I have seen him doing the same thing at least 10 times before.

"I want to share this to push him to stop doing this."

Richard, whose Chinese name is Wu Wenyi, further alleged that his neighbour would sprinkle water everywhere when watering plants, in addition to throwing leaves, twigs and small stones down the block.

During his separate interviews with Stomp and Wanbao, Richard repeatedly said the man was his neighbour.

Wanbao subsequently visited the neighbour next door, who revealed that Richard is actually his older brother.

Wu Wenyong, 61, said he was aware that Richard had caught him on camera and uploaded the video online.

While he admitted to plucking the leaves, Wenyong denied throwing stones down the block because he knew that the consequences would be dire if someone got hurt.

He also shared how he started falling out with Richard around three to four years ago, but said he still does not know why his brother is upset with him.

"When our mother passed away one year ago, my older brother became a lone wolf. He does not keep in contact with relatives and friends, and did not even attend our mother's funeral."

According to Wenyong, Richard's behaviour intensified and he installed a CCTV camera outside his unit to keep tabs on his plants along the corridor.

He added that Richard once stood in the corridor and used a mobile phone to film inside Wenyong's home.

Feeling that his privacy had been invaded, Wenyong got into an argument with Richard and ended up calling the police.

Related Stories
Why you pluck my plant's leaf and throw it down the block at Chai Chee Road?
Queen's Close resident calls police on 'noisy' neighbours 155 times over 7 years
Bedok Reservoir Rd resident complains about neighbour's parrots: "I can't sleep at all"
More About:
dispute
neighbour
neighbour from hell
plants