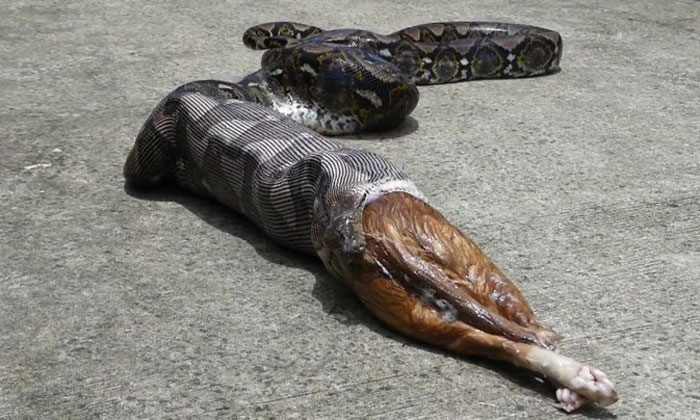 A greedy five-metre python tried to make a sumptuous meal out of a chubby cat and then found out it was too big to swallow.

A gruesome three-minute video circulating on social media shows the snake regurgitating the 3kg cat called BoBo in a suburb near Bangkok. Footage shows wildlife control officers moving the snake around the pat

Although pythons of this length are common in Thailand, it is very rare to capture such an incident on film, said Siroj Kamoltronwattana, a wildlife control officer who caught the python.

The cat was one of three pet cats belonging to a 59-year-old Saowarak Charoen.

She was about to feed them on Wednesday (September 6) when she stumbled upon the python with one of her cats already in its tummy at her home in Pathum Thani.

"I was in the house when I found that one of my three cats was missing. I walked around looking for it when I saw a snake sticking out from underneath the sink cupboard, its body bloated like it had swallowed something," Saowarak told Khaosod news.

Siroj and his two colleagues took half an hour to catch the reptile with a rope attached to a metal rod.

Saowarak buried her dead pet while the python was taken away to be returned to the wild, reported Khaosod.