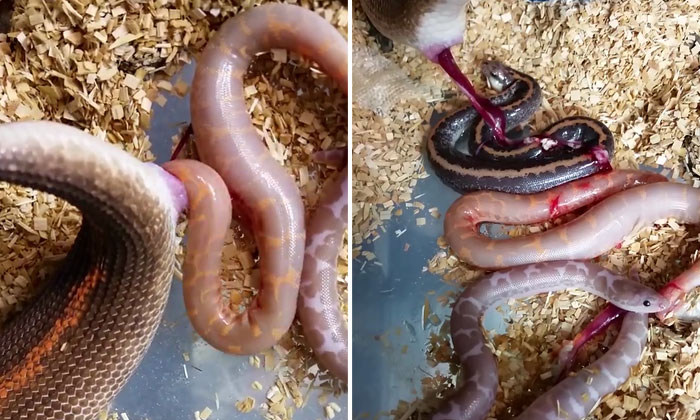 Do snakes lay eggs or give birth to their young? If you answered "the former of course, 'duh'", be prepared to be very confused.

Many were, judging by reactions to a clip posted online of a sand boa giving birth, to not just one, but three baby snakes.

The three-minute clip has been baffling the internet since it was posted last week (Aug 25), accumulating 10 million views and nearly 80,000 shares on Reptile Collective's Facebook page.

The clip shows a pinkish baby snake sliding out of the mother and plopping lazily next to what is presumably another newborn sibling. She is soon joined by a third baby snake before the clip ends.

Like all birthing videos, some blood and serpantine fluids are expected so viewers, you have been warned.

A simple comment on the video which said: "Wait am I crazy for thinking all snakes laid eggs?" received more than 600 similarly quizzical responses.

And many were glad they're not alone.

Of course, some blamed their teachers for their ignorance.

"I'm finding my elementary school teachers and firing them myself," wrote a Brittany Hutchcraft.

But here's a nugget of information that you can impress your friends with next time: A reported 70 per cent of the world's snakes lay eggs.

These 'ovipararous' snakes like cobras and adders tend to reside in warmer climates, while 'viviparous' snakes like boa constrictors and green anacondas found mostly in colder environments give birth to their young live.

There's also Ovoviviparous snakes (rattlesnakes are one of them) where the eggs are hatched inside the mother and the snakes are born live.