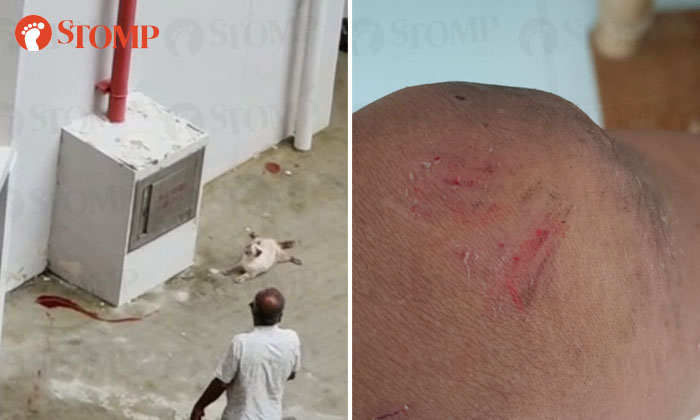 A cat died after falling from an eighth-storey unit at Block 122 Teck Whye Lane on Oct 1 at about 4pm.

Several Stompers alerted Stomp to the incident and shared that the cat's owners allegedly followed a cat rescuer to a carpark where a scuffle reportedly ensued.

The woman suffered an abrasion on her knee and it was alleged that the owners had thrown her phone onto the tarmac.

A Stomper shared what happened before the dispute: "The rescuer pointed out to the owners that their cat escaped since their gate was only meshed halfway and their main door was left open.

"The rescuer also said the unit will be reported for failure of duty of care.

"The assailants then called the police claiming they were 'unhappy' that the rescuer had earlier visited their unit to tell them about their dying cat and that they would be reported."

The Society for the Prevention of Cruelty to Animals (SPCA) was alerted to the case of a cat falling from height on Oct 1.

In response to a Stomp query, Ms Aarthi Sankar, executive director at the SPCA said: "Our Animal Rescue Officers attended to the case immediately.

"Unfortunately, the cat passed away en route to the clinic.

"The body was then claimed by the pet guardian on the same day.

"The SPCA receives 4 to 5 cases of cats falling from height each week, with half dying from the impact of the fall.

"These are just the reported cases, and we believe the number to be much higher.

"We appeal to all pet owners, especially cat owners to mesh their windows and secure their doors to safeguard your pet’s well-being.

"One startle or loose footing is all it takes for a pet to fall from height."