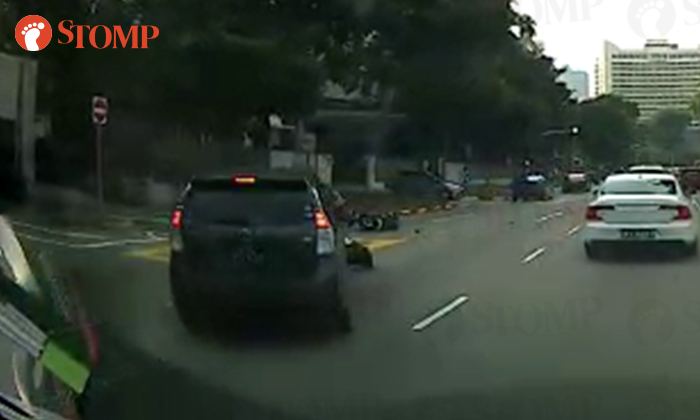 A car was filmed cutting across four lanes and colliding into a motorcycle at about 9.15am on Tuesday (Oct 15).

Stomper Tan contributed a video of the accident that occurred along Kim Seng Road.

Tan told Stomp: "I was driving along Kim Seng Road towards Havelock Road. My boss was in the car with me and we were going to Tiong Bahru for breakfast.

"The driver from the rightmost lane cut through, he was like almost making an L shape.

"The road is going straight but he tries to cut in from the outer lane. When he cut in, I saw a motorcycle come.

"The driver came from the side lane and maybe he didn't see the motorcycle.

"I was just behind so you can see how it happened in the video.

"Luckily the motorcyclist just fell and managed to get up. I think it's not serious.

"In the first place, drivers drive very selfishly and they're not considerate.

"You shouldn't cut through lanes like this. Every car had to stop for him.

"I'm on the roads every single day and I always see accidents like this one.

"There are so many drivers like this. I feel like should film videos of these drivers and post so can see how inconsiderate and selfish they are."