5 injured after Honda crashes into road divider along Airport Boulevard 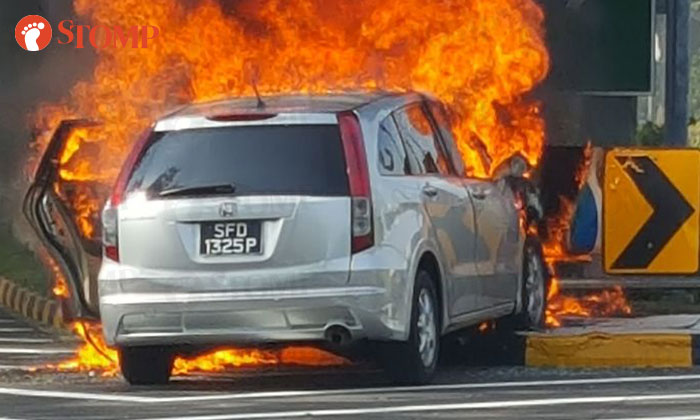 A silver Honda caught fire after crashing into a road divider along Airport Boulevard today (July 24) at around 5.05pm.

Stomper Mavis, Rajbir and Ah Boy alerted Stomp to the incident, which occurred along Airport Boulevard towards Changi Airport Terminal 2.

Mavis, who was driving by the vicinity, took a video which she sent to Stomp.

In the video, the car had mounted the kerb, with its front visibly damaged, while thick smoke was emitted from its bonnet.

In another video sent by Rajbir, the entire front of the car was charred from roaring flames, which completely engulfed the front of the vehicle.

The SCDF, who was alerted to the accident at about 4pm, said it dispatched one fire engine, one Red Rhino, two fire bikes and two ambulances to the scene.

It added: "The car which caught fire was extinguished by the SCDF with two compressed air backpacks and one water jet.

Stomp understands that the car crashed into the road divider and SCDF officers had rescued the four victims from the vehicle before it caught fire.