Can you do the "Asian squat"? PM Lee surprised to find himself lead demonstrator of this pose 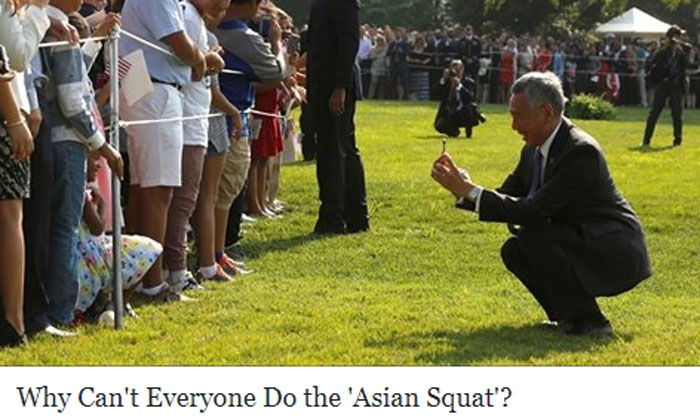 Being an influential figure, it is not out of the ordinary for Singapore's Prime Minister Lee Hsien Loong to be used as an example in several areas.

However, the PM himself was surprised when he found he was "lead demonstrator" in a manoeuvre dubbed the "Asian squat".

An Asian squat is a deep squat where you go as low as possible while keeping your balance on your heels that are down on the ground.

American magazine The Atlantic used a photo of PM Lee in an Asian squat on the White House lawn with Barack Obama looking on in the background for its article on the Asian squat.

"My staff showed me this article on the “Asian squat”.

"I was amused (and amazed) to find a photo of myself as lead demonstrator of this manoeuvre.

"The power of Internet image search!

"It’s an interesting read on something that most Singaporeans do without a second thought.

"We seldom contemplate the mechanics when we squat, but there certainly is science to this – flexibility and practice seem to be key."

So the question is, can YOU do the Asian squat?