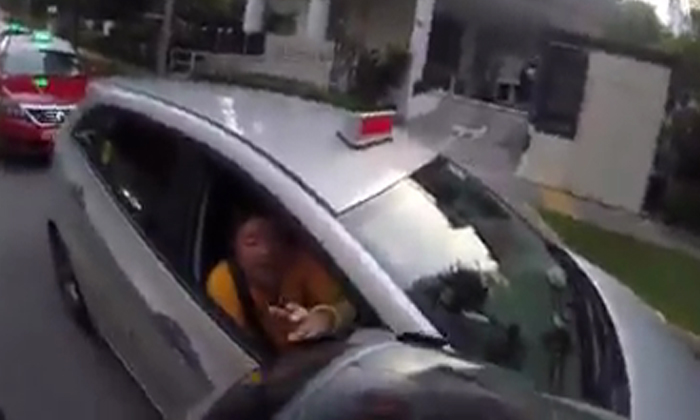 A taxi driver nearly caused an accident with a motorcyclist but showed no remorse for his actions, leading the two to be engaged in a heated argument.

It is unclear when and where exactly the incident occurred, but a video uploaded online has been circulating on Facebook.

It shows how the cabby drove very closely to the biker while filtering into the latter's lane in a tunnel, hence almost causing a collision.

When they were out of the tunnel, the biker rode up to the cabby -- who flashed his middle finger and drove off.

The cabby then started playing a 'braking game', abruptly stopping his vehicle on the road several times for seemingly no reason at all.

The two parties eventually got into a heated argument, in which the cabby challenged the biker to call the police.

Cabby: "You don't need to follow me. That stretch of road is yours ah?"

Biker: "Hello! That stretch of road is yours ah? You signal means can enter ah? Hello! If I was [driving] a car, you would enter ah?

Cabby: "Never mind, you knock [into me] lor.