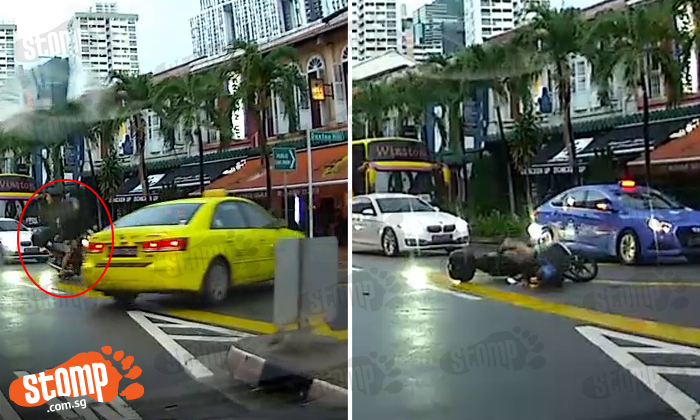 A taxi driver was caught on camera causing a rider to fall off his rider after making a reckless turn, and then speeding off.

Stomper Jackson had captured the incident on video. It took place along Duxton Road on July 24, at about 7pm.

"Basically, I was on my way to dinner and this cab was in front of me.

"The motorcyclist had the right of way going straight and the cab made a reckless right turn, causing the rider to e-brake and fall over.

"I tried to chase after the taxi to stop it when it turned into Duxton Road, but there was a car in front of me and Duxton has two roadside parking.

"The cab sped off after exiting Duxton and when I made the turn, I was held back by traffic so I couldn't catch him."

Jackson added that the driver of the white Mercedes in the video had tried to aid the motorcyclist after he fell off his bike.