Appeal for witnesses: Biker and pillion rider injured after getting hit by car on KJE 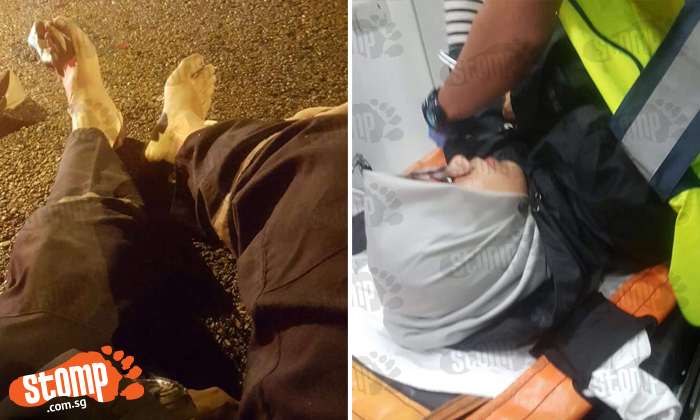 A motorcyclist is appealing for witnesses after he was hit by a car on the Kranji Expressway on Oct 24, at around 9.45pm.

Faiz Roslan tweeted photos of the accident and asked the public to 'spread the word'. One picture appears to show him sitting on the ground.

In response to a netizen who asked if he was okay, Faiz said that his female companion, who is presumed to be the pillion rider, broke her leg.

"She's in a worse condition than me," Faiz wrote on the Twitter thread.

Stomper Nasatiqah also alerted Stomp to what happened and said that her cousin's wife and her brother (Faiz) were the ones injured in the incident.

Nasatiqah said, "His wife suffered a broken right thigh and her brother suffered a minor injury."

If you are involved in a traffic accident on the expressway, there are steps you can take to ensure your safety and that of other motorists. Check out this One Motoring site to find out what you should do: http://bit.ly/2eWWNyy