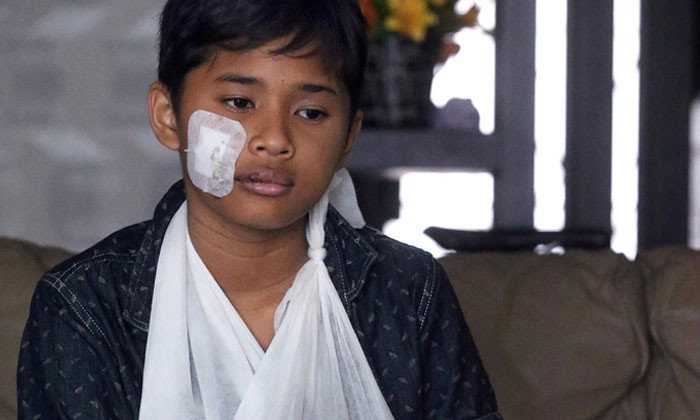 An alleged hit-and-run accident last Friday not only left a boy with a broken arm but also caused him to miss part of his PSLE.

Raiyan Haikal, 12, is bitterly angry at the lorry driver who, he alleged, did not stop after hitting him.

"I can only feel anger," said the East Spring Primary School pupil, who is disappointed over not being able to complete his PSLE.

He took two papers, but had to miss Malay and Science, which he said he had studied especially hard for.

The accident left him with a fractured right arm - his writing hand - and a major cut on his cheek.

Raiyan said he had been crossing the junction of Compassvale Walk and Compassvale Road at 3.30pm, on his way home from the mosque, when the accident happened.

He told The New Paper that he is very certain that the lights were in his favour.

He heard the sound of a vehicle engine and the next thing he knew, the lorry had hit him.

"There was blood flowing from my right cheek and I felt pain in my whole (right) arm," he told TNP.

"I ran towards a bus stop (where there were bystanders) and I shouted, 'Uncle, help!' Then I felt tired so I lay down on the grass."

Passers-by called the police and ambulance. His mother, Madam Sofia Aziz, 43, said she was shocked when she received a call from one of the passers-by.

"When you see your son, bandaged like a mummy with so much blood... as a mother you would faint," said Madam Sofia, who works part-time as a baker at Petite Bakehouse at Anchorvale Road.

She arrived at the accident scene and went with her son to Khoo Teck Puat Hospital.

She believes that the side mirror of the lorry hit Raiyan's right cheek, cutting it. A fragment of glass was found in his wound at the hospital.

The boy was transferred to KK Women's and Children's Hospital. He was discharged on Sunday and remains on medical leave till Oct 21.

When asked whether Raiyan was using a mobile phone while crossing the road, Madam Sofia said he had not been allowed to take his phone to school that day because of his exam.

The pupil, who took his Maths paper last Friday, regrets that he did not have a chance to do his Science paper on Tuesday.

"I was looking forward to it. I like to do science a lot and I learnt a lot in school,'' he said.

Madam Sofia said that before Raiyan went into the operating theatre, he had asked her whether he could recover by Monday so that he could take his Science paper.

She said that pride and sadness overcame her. She added that her son had put in so much effort for the PSLE papers that it even got to the attention of his teachers.

When asked about medical fees, Raiyan's mother said she has not yet received the bills, but admitted she is worried.

"This will affect our finances a lot, we already have six children. My husband is the main breadwinner, I only work part-time. My eldest daughter is only in Secondary 2," she said.

The New Paper understands that Raiyan's father delivers letters and documents to offices.

For now, Raiyan is trying to recover. He needs help bathing as he cannot use his arm yet. Some of his teeth are also shaky.

As for the PSLE, his mother said the school has explained that they will compute his score based on his scores in Primary 5, and 6, all the way to his preliminary exams.

Madam Sofia said: "As a parent of course we will be worried but we just have to accept fate and life has to go on."

East Spring Primary School told TNP that the school has contacted the Singapore Examinations and Assessment Board (SEAB) to do the necessary follow-up request for special consideration.

"We are also providing him support to facilitate his recovery," the school added.

A SEAB spokesman said: "We have a process in place to give special consideration to such candidates who missed papers with valid reasons.

"We will take into consideration the candidates' performance in the other papers and their peers' performance so that they are not disadvantaged."