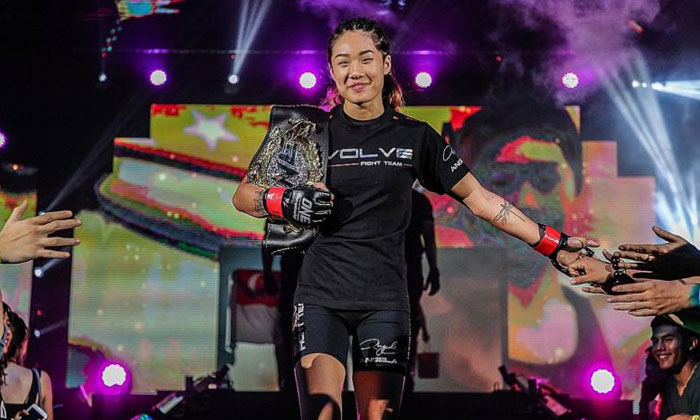 Now, she is considering a move up in weight class to take on bigger opponents.

Speaking to The New Paper at a media lunch organised by Grey Group yesterday, the 21-year-old Canadian-American did not rule out switching to the strawweight division, where the weight limit is 56.7kg as opposed to 52.2kg in her current division.

Said Lee, who fights under the Singapore flag: "Moving up to the strawweight division is something I do have in mind, but I am not sure when I will make that transition over.

"Atomweight has always been a difficult cut for me, a difficult weight to maintain. I think that the next division would be my ideal weight.

"The strawweight division has more girls now and ONE Championship has really been working hard to build that division. So, I would love to make my way over.

"I think I have done a good job here in the atomweight division but I still have this match with Mei. But after that from 2018 onwards, who knows?"

Should Lee make the switch, it will open up the prospect of a fight against 41-year-old Singaporean May Ooi.

A former national swimmer and Olympian, Ooi made a winning ONE Championship debut in Kuala Lumpur last month, when she defeated Malaysian Ann Osman by submission in a strawweight bout.

In previous interviews with TNP, both Lee and Ooi had expressed their eagerness over a face-off.

But, for now, Lee is focused on a more immediate task.

Come Nov 24, the youngest MMA world champion will take to the Singapore Indoor Stadium again to defend her title against Japanese fighter Mei Yamaguchi at the ONE Championship: Immortal Pursuit event.

This is the second time that Lee will take on Yamaguchi, from whom she snatched the atomweight title at the same venue in May last year.

Lee revealed that the possibility of Yamaguchi "getting the best of her" has motivated her to work even harder.

She said: "Going into a fight, you think of all the possible scenarios.

"Not necessarily defeat, but the thought of my opponent getting the best of me does cross my mind.

"But when I think of that, I also think about how much being a world champion means to me. I am reminded of the hard work that I put in to get to where I am right now.

"Thinking of that motivates me that much more to work even harder so that it does not happen.

"I am not scared of getting hurt, I do not think about it. Whatever happens in the ring happens and I deal with the consequences.

"I am not afraid of losing, but I am more afraid of being a disappointment.

"This time round, I am going to do it right."