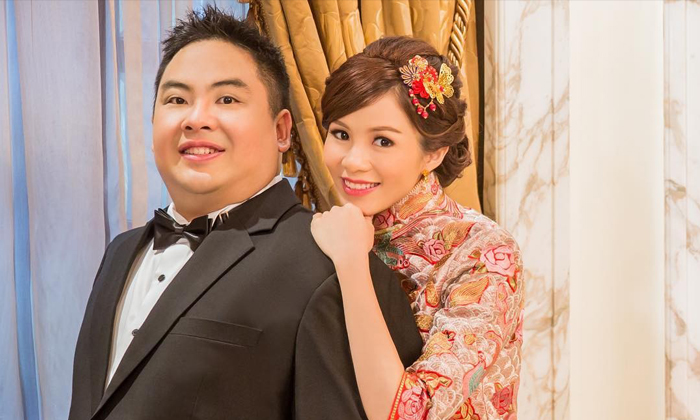 Former local TV actress Tracy Lee got married over the weekend, but it was her guest list that had fans' eyes popping.

Lee, 32, a Malaysian-born actress and host, took part in Star Search 2007, but reportedly quit showbiz in 2015 after she chose not to renew her full-time contract with Mediacorp.

Her groom is none other than Ben Goi, the scion of local tycoon Sam Goi, chairman of Tee Yih Jia Foods, which churns out 35 million pieces of frozen popiah skin daily. The elder Goi is also known as Singapore's 'Popiah King', with an estimated net worth of about $3 billion, according to Forbes.

Not much has been reported of the younger Goi in the media, but he is believed to be working for his father in his sprawling empire, among which includes food and property-related businesses.

The wedding was held at Shangri-La hotel at Orchard on Saturday (Sept 30), with a guest list which read like a who's who of Singapore's government, business and entertainment circles.

In addition to actor Terence Cao, who was one of the groomsmen, a bevy of local celebrities were also spotted at the event - from veterans like Xiang Yun, Aileen Tan and Hong Huifang, to younger stars such as Shane Pow, Kimberly Wang and Julie Tan.

In several Instagram posts early on Monday morning, Lee expressed her gratitude for the well-wishes on her big day.

In one of the posts, Lee wrote: "Can't believe I'm married... someone even asked what am I acting in now, or why they don't recognise the scene nor the 'lead actor'. Dear friends, I really got married yesterday. He's my lead actor, number one lead, and someone who'll look after me forever."

Congratulations to the happy couple!

Check out all photos from the star-studded wedding in the gallery above.