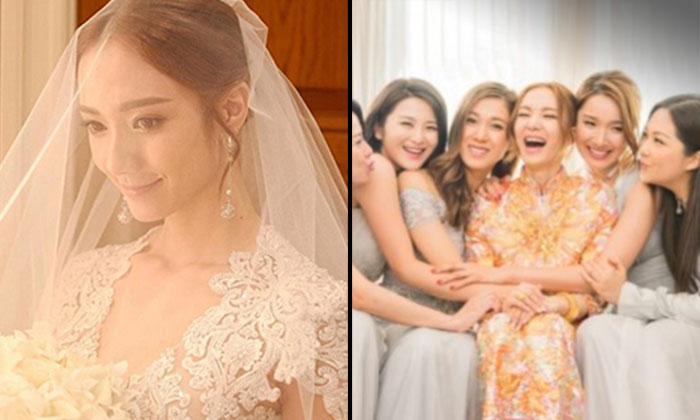 The two had reportedly decided to hold the ceremony there as it was the place the couple had originally met, reports Jayne Stars Online.

The star-studded squad even composed a rap song for the bride and groom, moving many to tears.

Photos of the joyous occasion were shared on social media.

Grace wore two sets of bridal dress, first appearing in a traditional Chinese bridal dress, before changing to a lace wedding gown while walking down the aisle.

The couple intent to hold a banquet in Hong Kong on Jul 11, which is expected to be larger than the one in new York.

Good friend Christine Kuo who was noticeably missing from the New York banquet due to work commitments said that she would definitely go to the one in Hong Kong.

Jonathan Wong and Sherman Chung were also unable to attend the wedding in New York due to work.

“I really wanted to go to the USA for Grace’s wedding, but I had to prepare for my new TV program.

“I already made a deal with her for her July banquet, she can tell me to sing, dance, or anything.

“I’ll even dance with her husband if she tells me to – I owe her!”

When asked about his absence, Sherman said:

“I initially planned to attend, but I was unable to move my schedule around.

“I’m very happy for Grace on this special day.

“The most important thing is their happiness; I hope they have children soon!”