70-year-old MBS valet sent flying after getting rammed by taxi: 'Until now, cabby has not visited me' 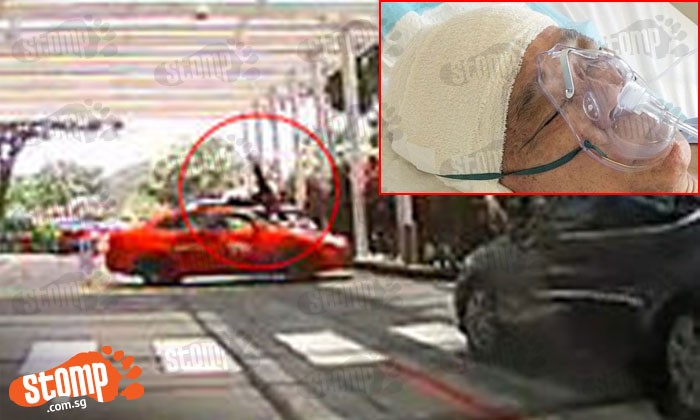 The 70-year-old valet who was sent flying after a 52-year-old Trans-Cab driver rammed into him at Marina Bay Sands on Sep 24, has said that the culprit has not visited him in hospital.

Stompers Dean, Bill, Mike and Marcus shared a clip of the incident at Bayfront Avenue's Tower 1 with Stomp.

According to The New Paper, he told Shin Min Daily News that 'all he remembered was he was near the hotel's entrance when suddenly he saw this taxi moving quickly in his direction and he was knocked down after that.'

He said, "I lost consciousness and I cannot remember details of what has happened since."

The valet captain had a bandage around his head and spoke through an oxygen mask at Singapore General Hospital's high dependency ward.

He told the Chinese daily of his injuries which are mostly around his head.

Regarding the cabby, Mr Lee said: "I don't know him and until now, he still has not visited me. I want to see the video and I am not ruling out a lawsuit."

Marina Bay Sands has also confirmed that Mr Lee was on duty at the point in time.

A spokesman at the hotel has stated that, "He is being treated in hospital. We are rendering assistance to him and his family... and are helping the authorities in their investigations."

The valet captain was known as 'Captain Lee' by his colleagues, has six years of work experience at the hotel and manages a team of valets.

Mr Lee believes that the hotel will likely compensate him as it was a work injury.

Trans-Cab has stated that they are investigating the incident.