Witness of chain collision at Woodlands: Lorry didn't slow down after plowing into first car 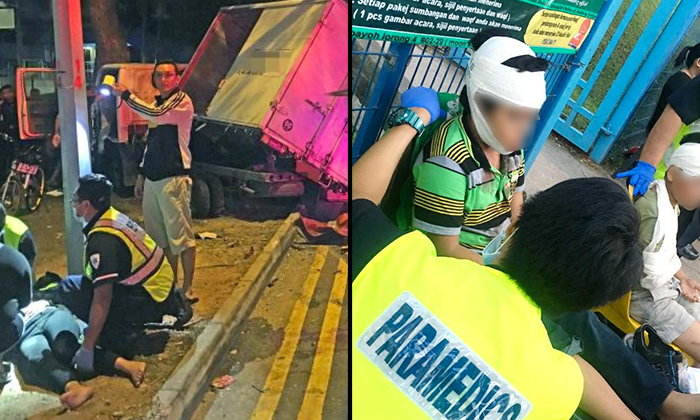 A chain collision involving two lorries and two cars happened yesterday (Jun 4) morning at around 5.55am, at a cross junction between Woodlands Avenue 5 and Marsiling Industrial Estate 5

It was earlier reported that seven people were sent to hospital following the accident.

In an interview with Stomp, a 25-year-old witness, Facebook user Nur'Ain Rosman said that the affected vehicles - a lorry and two cars - belonged to her friends.

Rosman recalled that she had had just finished her breakfast with a group of colleagues at a coffeeshop nearby, and were on the way back to a church.

Investigations revealed that a lorry travelling on Woodlands Avenue 5 had crashed into two cars and another lorry parked at the roadside, for reasons unknown, reports Shin Min Daily News via Lianhe Zaobao.

"The lorry driver crashed into the first car, before hitting another lorry. The impact moved the affected lorry up the kerb, and it crashed into a tree. The runaway lorry then hit another car before finally stopping."

According to Rosman, the lorry did not slow down after hitting the first car and continue plowing into the other vehicles.

She believes that the driver could have mistaken the accelerator pedal for the brakes.

Rosman also revealed that three passengers who were on board the affected lorry, as well as another who was preparing to board had been sent flying after the rampaging lorry hit their vehicle.

Another 10-year-old boy who was in the front seat of the lorry had gotten stuck and was freed only after assistance from the other passengers.

A passenger who was in the culprit’s lorry’s front seat was also trapped after the accident and was extracted by SCDF officers.

A SCDF spokesperson said that the SCDF had dispatched a fire engine, a Red Rhino, and seven ambulances to the scene after it received a call.

The police have confirmed the incident, and that five of the victims were conveyed to Khoo Teck Puat Hospital while another two were sent to KK Women's and Children's Hospital.