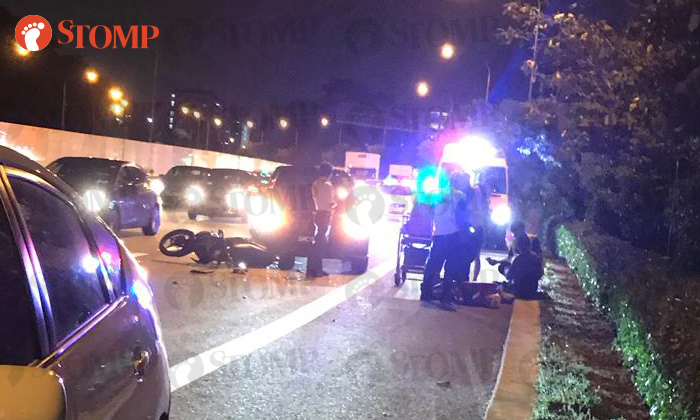 A 34-year-old man was taken to hospital after an accident involving his motorcycle and two cars along the Pan-Island Expressway (PIE) last Wednesday night (July 24).

Responding to a Stomp query, the police said they were alerted to the three-vehicle accident, which occurred in the direction of Changi Airport, at 8.05pm.

Stomper Mark was at the scene and said he helped to direct traffic.

Mark, who contributed photos showing paramedics attending to the motorcyclist, told Stomp: "This was around 300 metres before the turn into the Tampines Expressway.

"A motorcycle was hit from behind by a female driver in a BMW. I think it was because a white car in front had suddenly braked, thus resulting in the collision.

"The motorcyclist's shoulder was injured."

The motorcyclist was conscious when conveyed to Changi General Hospital, police added,