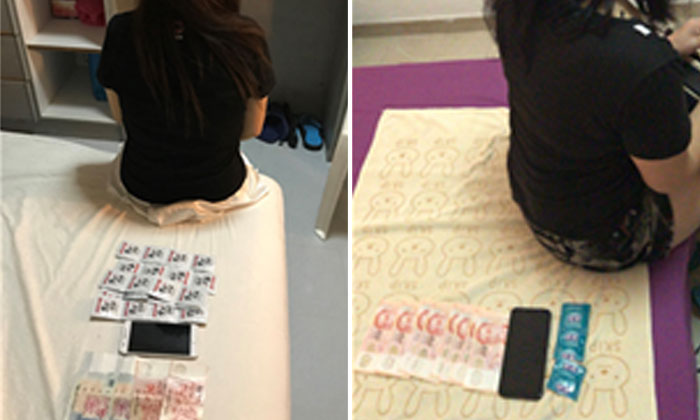 Twenty-two men and 11 women were arrested in a joint enforcement operation conducted by the police, Central Narcotics Bureau (CNB) and Singapore Civil Defence Force (SCDF) between July 23 and Aug 1.

A 35-year-old man and nine women, aged between 26 and 45, were arrested for offences under the Women's Charter. A 37-year-old woman was arrested under the Employment Act.

Preliminary investigations revealed that the women were advertising sexual services online and operating within residential units in Yishun and Sembawang estates.

The man is believed to have assisted in the management of two of the residential units.

A total of $890 in cash and four handphones were seized.

Another 13 men, aged between 21 and 51, were arrested in a private residential unit in the Braddell Heights estate for offences under the Common Gaming Houses Act.

Preliminary investigations show that three men were operating a gambling den while ten others participated in the games.

Additionally, six men, aged between 20 and 56, and a 34-year-old woman were arrested for suspected drug-related offences.

Five packets of substances which are believed to be controlled drugs and some drug paraphernalia were seized.

The police said that landlords and hotel owner should ensure that tenants do not carry out vice activities in their premises.

Under the Women's Charter, unlicensed brothel operators can be fined up to $10,000 and/or up to five years' jail.

Under the Common Gaming House Act, any person gaming in a common gaming house may be fined up to $5,000 or jailed up to six months, or both.

Any person who manages or assists in the management of a common gaming house shall be liable on conviction to a fine of between $5,000 to $50,000 and be jailed for up to three years.

"The police will spare no effort to stamp out illegal activities and those found engaging in such activities will be dealt with in accordance with the law."