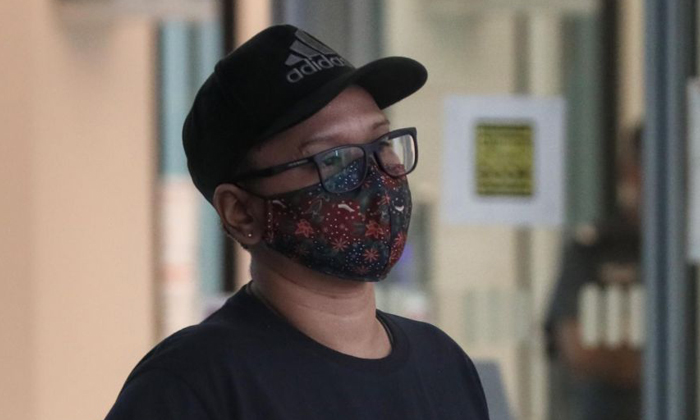 A woman who joined her family members in abusing a mildly intellectually disabled friend so severely that she almost died was sentenced on Monday (Feb 1) to three years' jail and ordered to pay $1,000 in compensation to the victim.

Hasniza Ismail, 40, committed acts such as chaining the victim up to a metal plate fixed to a wall and hitting her with a baseball bat.

The Singaporean was the fourth person linked to the woman's horrific abuse to be dealt with in court.

One of her brothers, Muhammad Iskandar Ismail, 32, was jailed for two months and four weeks on Jan 7 this year while another brother, Muhammad Iski Ismail, 30, was sentenced to eight months' jail that day.

On Jan 7, Hasniza also admitted to one count each of wrongful confinement, voluntarily causing hurt and perverting the course of justice.

That same day, her sister Haslinda Ismail, 34, pleaded guilty to two counts of voluntarily causing hurt and one count of twisting the victim's toe with a pair of pliers until it fractured.

Haslinda is expected to be sentenced on Wednesday. The women's mother, Hasmah Sulong, 70, is also accused of taking part in the acts of torment and her case is pending.

The victim, now 30, was the secondary school friend of Hasniza's brother, Mr Muhammad Isafi Ismail, and worked in a fast-food restaurant.

She got to know the rest of his family and grew close to them over time. After running away from home in early 2016, the woman moved into their flat at Block 714 Woodlands Drive 70, where she stayed rent-free.

She, however, had to buy her own food and gave Hasmah $150 a month for laundry.

Some time between May and June 2016, Haslinda confronted the victim for performing sexual acts on her husband. From then on, several members of the family abused the victim repeatedly.

These included knocking out her teeth with a hammer and splashing boiling water on her.

The court heard that Haslinda confiscated the victim's mobile phone in June 2016. The victim stopped working at the fast-food restaurant soon after and was made to do household chores without pay.

The victim initially slept in the living room but Haslinda later accused the woman of stealing from her. On her mother's request, Hasniza bought a metal chain to restrain the victim at night.

Deputy Public Prosecutors Ang Feng Qian, Li Yihong, Grace Chua and Ng Jun Chong stated in court documents: "On most nights, between 10pm and midnight, Hasmah used the metal chain, which was secured with a padlock, to tie (the victim's) hands or legs to (a) baby swing in the living room.

"Hasmah wanted (the victim) chained up at night because she was concerned that (the victim) would run away or steal food from the kitchen. Hasmah would keep the key to the padlock and use it to unlock (the victim) in the morning between 8am and 10am."

The court heard that a metal plate with a hook was later installed on a wall and the victim was then chained to it. There were also occasions when Hasniza chained the woman up.

Some time in late 2017, the victim started suffering from urinary and faecal incontinence.

She was then moved to a toilet where she was chained up for most of the day.

Due to the repeated acts of abuse, the woman's condition became so dire that Hasniza called for an ambulance on Jan 16, 2018. The victim was taken to hospital in a "near death state".

The severely malnourished woman was later found with injuries including 10 missing teeth, as well as multiple wounds and burns. She was only discharged from the Singapore General Hospital on April 20, 2018.

The court heard that Hasniza threw away the metal chain before the police could seize it. The metal plate was removed and the wall was plastered over.

Hasniza also told Iski to lie to the police about the acts of abuse. She finally came clean about the offences on Jan 27, 2018.

Related Stories
Woman in near-death state after being forced to eat soiled food with urine, had toes twisted by pliers
Family allegedly abused friend, knocked out her teeth and forced her to eat food soiled with urine
More About:
abuse
court