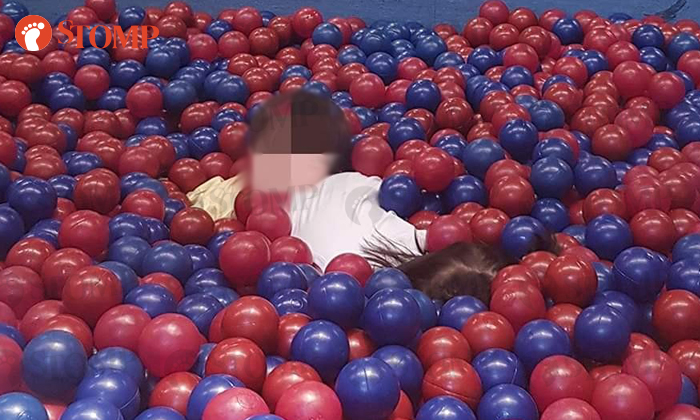 IKEA is investigating an incident where a two-year-old girl was pinned down by a three-year-old boy in the play area of its Tampines outlet last Thursday (Feb 7).

Stomper Chanel, who is the aunt of the two-year-old girl, said she was with her brother and her sister-in-law when they witnessed the incident at around 3.45pm.

Chanel told Stomp: "Adults are not allowed to accompany children into the Småland play area so we watched from the window.

"My niece had gone in for only five minutes when I saw a boy pinning her into the ball pit."

The Stomper described her niece's ordeal: "At first, I saw that she was standing up.

"Suddenly, the boy was on her back. My niece had her whole body and head buried, I couldn't see her at all. She was screaming and crying for help.

"I knocked on the glass and the boy gave a smile."

According to Chanel, she "tried to look for IKEA staff but no one was there."

She and the girl's parents could not enter the play area as it was locked, she said, adding: "I raised my voice for help and finally the staff appeared and pulled my niece out.

"By then, she was crying badly."

Chanel, who posted about the incident on IKEA's Facebook page on the same day, said that the boy was accompanied by two adults.

In her post, she also described what happened afterwards, with the girl's family eventually deciding to "let the matter rest".

Chanel told Stomp that a manager from IKEA contacted her the following day regarding the incident.

In response to a Stomp query, an IKEA spokesman said: "We are aware that this incident took place at our IKEA Tampines store on Thursday and we are sorry about the less than pleasant experience.

"The safety of our customers are of utmost importance, especially with children that play at our Småland play area.

"In the event where we have observed improper children’s behaviour in Småland, our immediate course of action is to separate the children, and call their respective parents/guardian, to ensure that all parties are aware of the incident and take the corrective measures."

IKEA said that these steps were followed in this case and that it has spoken to all parties involved.

It added: "We will continue to monitor this situation closely.

"We are investigating and will also review with the co-workers concerned.”

Related Stories
Woman's nose broken by baseball that rebounded towards her, SuperPark to review safety standards
Girl slapped while kneeling at carpark: Steps taken to ensure her safety, says MSF
Father of boy attacked at Yishun playground: Autistic son hugged man as he wanted to play together
Mum of boy who was slapped by stranger tells Stomp: "Lucky my son isn't seriously hurt"
More About:
child
Ikea