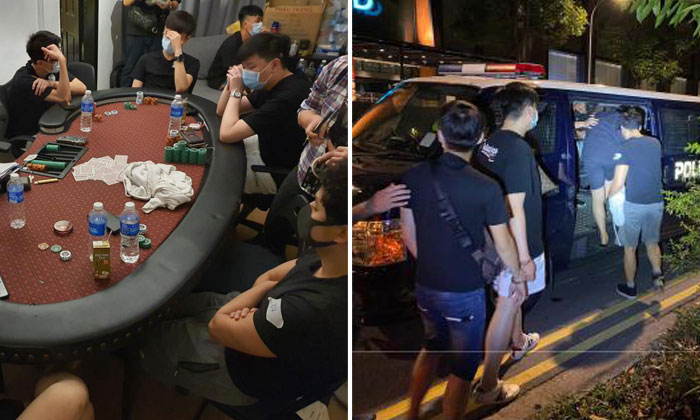 Ten men and one woman, aged between 20 and 35, were arrested for illegal gambling, flouting safe distancing measures (SDM) and drug offences.

The police said in a statement that officers from Tanglin Police Division conducted an operation at a residential unit along Zion Road and found 11 people purportedly gathering and engaging in gambling-related activities.

They were subsequently arrested for their involvement in offences under the Common Gaming Houses Act and Misuse of Drugs Act.

Substances believed to be controlled drugs, cash and gambling-related paraphernalia were seized.

The 11 people will be investigated for non-compliance of SDM as well.

In addition, eight of the men were also found to be in possession of e-vaporisers and were referred to the Health Sciences Authority for investigations under the Tobacco (Control of Advertisements and Sale) Act.

Those found guilty of gaming in a common gaming house can be jailed for up to six months, fined up to $5,000 or both.

If convicted of violating the safe distancing measures, the 11 people could face a jail term of up to six months, a fine of up to $10,000 or both.

The police added: "The police take a serious view against all forms of illegal gambling activities and will continue to take tough enforcement action against those involved, in accordance with the law.

"Members of public are advised not to engage in any form of illegal gambling and to comply with the prevailing SDM."