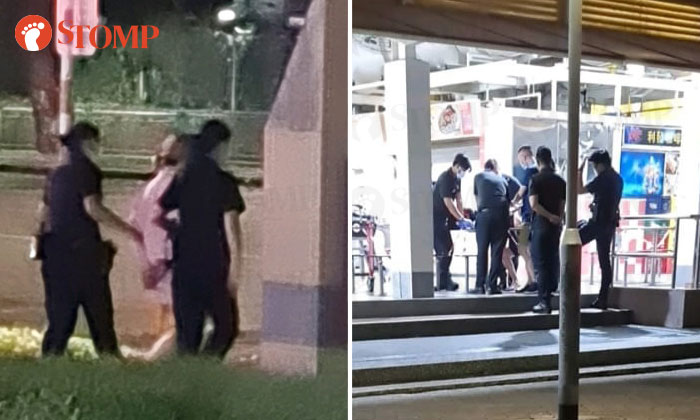 Six men and a woman, aged between 28 and 69, were arrested for suspected illegal gambling and breaching safe distancing rules in the early hours of Wednesday (June 9).

Stomper Wei Sien alerted Stomp to the incident and shared photos he took of police officers at a hawker centre at Block 210 Toa Payoh Lorong 8.

"I was resting nearby the area when I heard someone shouting 'don't run, don't run," he said.

"When I turned around, I saw an officer chasing someone.

"This is not my first time witnessing someone getting arrested for illegal gambling at that hawker centre."

The police said in a statement on Wednesday night that officers from Tanglin Police Division conducted an operation at around 3.24am at the said location and found eight people engaging in gambling-related activities.

People are only allowed to gather in groups of two until June 13 as part of the heightened alert phase now.

Another woman, 72, is assisting police in investigations.

Among the six men, a 55-year-old man was also arrested for allegedly causing annoyance while drunk.

For breaching safe distancing measures, offenders can be fined up to $10,000, face up to six months' jail, or both.

For causing annoyance to the public when drunk, an offender can be fined up to $1,000, or jailed up to six months, or both.

The police said in its statement they take a serious view against all forms of illegal gambling activities and will continue to take tough enforcement action against those involved in accordance with the law.

Members of the public are advised to steer clear of all forms of illegal gambling activities and to take the prevailing safe distancing measures seriously.