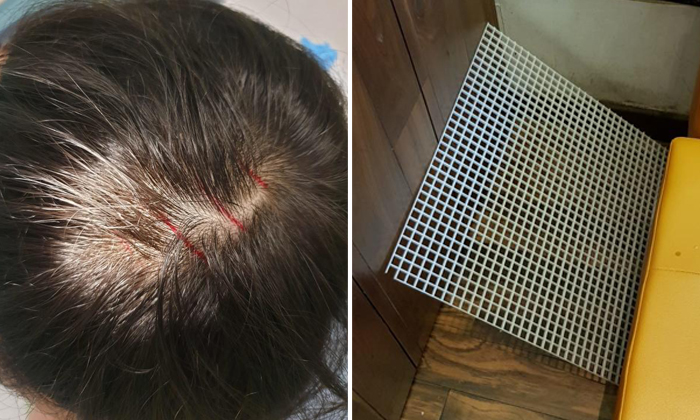 A ten-year-old boy was injured after an aircon diffuser grille dislodged from the ceiling of a restaurant in Bedok Mall and fell on his head.

According to Lianhe Wanbao, the incident occurred at Pepper Lunch restaurant on Monday (May 27), at around 2.30pm.

Mr Wu Caizhong, 46, said he had dined with his son and then rested in a corner seat after their meal.

He recounted: "I was checking my emails on my phone when I suddenly heard a loud noise, though I still didn't know what had happened.

"I only saw my son, who was seated opposite me, pressing on his head and saying, 'So pain, so pain' repeatedly. There was a ventilation grille next to the table."

When Mr Wu looked up, he saw that an aircon diffuser grille had dislodged from the restaurant's ceiling and fallen on his son's head.

The grille weighed 500g and fell from a height of three metres, reported Wanbao.

According to Mr Wu, the restaurant manager told him that the nearest clinic was two bus stops away. Worried about his son, Mr Wu decided to drive him to KK Women's and Children's Hospital instead.

He added: "My son was cut by the grille, leaving him with four bloody streaks (each 2cm-long) on the head. Fortunately, he did not need stitches and the doctor applied medicine on the wounds.

The boy was also given five days of medical leave.

Mr Wu's wife rushed to the hospital upon learning of the incident. The family of three only returned home at around 9pm.

Mr Wu, who lodged a police report on the same evening, said he hopes that the restaurant will treat the matter seriously so as to avoid similar incidents from happening again,