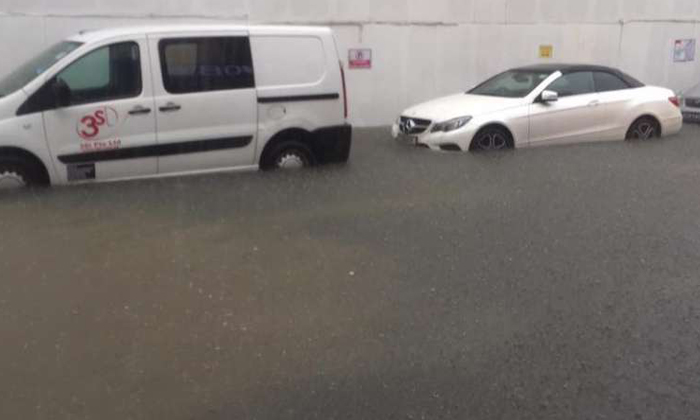 Mr Ricky Gabriel, who was at the UOB Bank on Upper Thomson Road when the flood happened, told The Straits Times that traffic was badly affected, especially as one of the roads in the area had closed a while back due to construction.

"Traffic was slow, drivers were impatient and honking," he said. "The through road outside the OUB bank is now a dead end, so all cars had to back out of there.

"Because the water was rising , they really wanted to get out of there fast," Mr Gabriel, 43, added.

The National Environment Agency had warned that moderate to heavy thundery showers with gusty winds were expected between 3.30pm and 4.30pm.

The flood was affecting a few stretches of the road, including the direction towards the Seletar Expressway after Jalan Pelatina, the Land Transport Authority (LTA) tweeted.

Traffic was backed up till MacRitchie Viaduct, LTA said.

The road towards Newton after Bright Hill Drive was also affected and the congestion was till Sin Ming Avenue.

LTA updated that the flash flood was over at 4.05pm. Mr Gabriel said at about 4.15pm that the flood appeared to be receding but it was still raining heavily.

Upper Thomson Road was also flooded last Christmas eve. The  flood affected at least eight businesses in the Upper Thomson area, one of which suffered an estimated $30,000 in losses.

National water agency PUB later found that construction firm Sato Kogyo, which is responsible for the construction of the Upper Thomson MRT station, had carried out unauthorised works that affected the public drainage system there.

PUB said it will take action against Sato Kogyo under the Sewerage and Drainage Act.