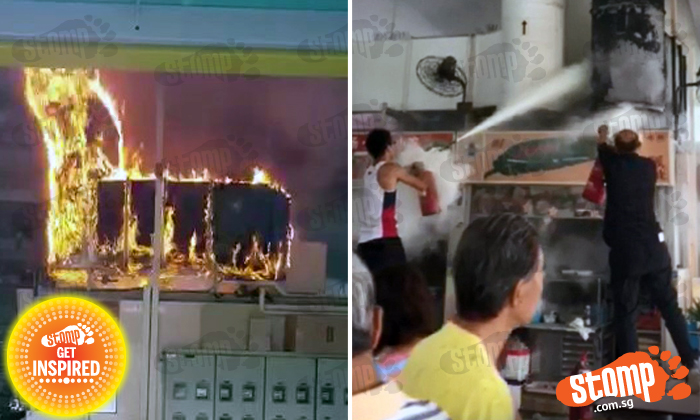 Stomper Amos saw some brave members of the public worked together to fight a fire that broke out at a Whampoa Makan Place hawker stall on Sunday (Feb 12).

More photos and videos of them using extinguishers and a hose to battle the blaze started circulating on social media at 1.30pm, one of which Stomper Bert alerted Stomp too.

Bert said the clip was being shared among his friends, and shows the fire engulfing the exhaust ducting of the air vent.

One clip posted on Facebook by Lim Een Kee shows the members of the public aiming the extinguishers and hose towards the air vent in the Hi Leskmi Nasi Lemak stall.

The exhaust ducting above the popular stall appears blackened in the photos and videos.

The Straits Times reports that the Singapore Civil Defence Force (SCDF) said it was alerted to the fire at 90, Whampoa Drive at about 1.35pm.

The fire at the exhaust ducting of the stall was extinguished by members of the public before SCDF firefighters arrived.

There were no reports of injuries, SCDF said. It sent one fire engine, two Red Rhinos and one support vehicle to the scene.

Senior Minister of State in the Prime Minister's Office Heng Chee How, who is the MP for Jalan Besar GRC, visited the affected stalls on Sunday afternoon.