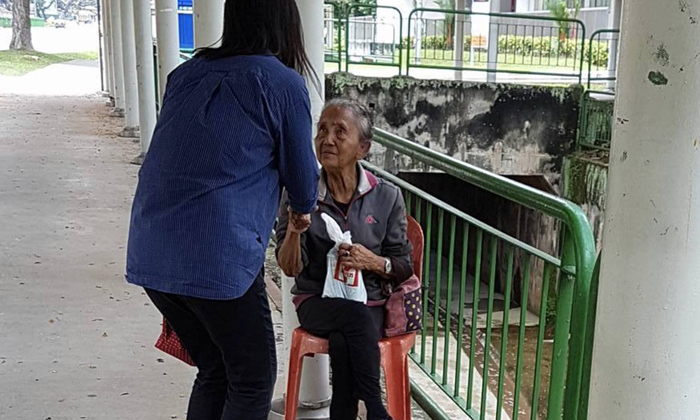 The phrase "faith in humanity, restore," is often used these days. But these people truly embody that phrase's meaning.

A photo shared by Facebook page Fabrications About The PAP shows an elderly woman seated on a chair at a sheltered walkway.

A younger woman is seen shaking her hand in the photo.

According to the photo's caption posted by the Facebook page's administrators, the elderly Malay woman would send her granddaughter to school every day.

She would stand outside the school and wait for the girl to be done for the day, before bringing her back home.

The Family Service Centre and senior centre nearby reportedly offered to let her sit within their premises before, but were declined.

However, kind passers-by who spotted the elderly woman waiting outside the school daily have reportedly been offering her food and drinks.

The photo drew positive comments from netizens, who praised the kind passers-by and wished that the elderly woman's granddaughter would study hard and grow up to be a caring person.

Related Stories
Kids take GrabCar to catch feeder bus, but kind driver sends them to their schools instead
Kudos! Man in red helps biker divert traffic after he skids and falls at Pasir Ris Drive 1
Not 1 but 3 bikers to the rescue after fellow motorcyclist gets injured during accident with taxi on AYE
inspiring
kind
kudos
good samaritan