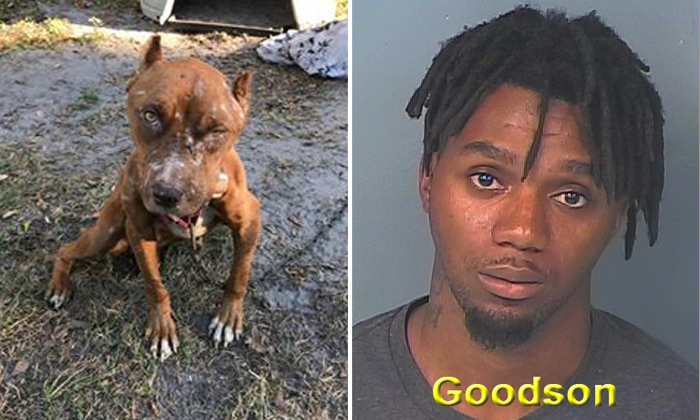 A poor dog in the US was so hungry that she took to eating her own puppies.

A media statement posted on Hernando County Sheriff's Office's Facebook page on December 29 said police officers had responded to a call about a dog bite.

When they went to investigate, they saw three pit bulls, two of which were on heavy chains and did not appear to have any water.

The third pit bull, a female named Chi Chi, was found on the side of the house and appeared to be in distress, said the statement.

She was malnourished and had extensive scarring on her face and front of her body.

She was unable to walk on her own, and her ears appeared to be mutilated and healed over.

Officers were told by the homeowner, Deandre Goodson who owned the three dogs, that Chi Chi had had puppies in December and eaten them.

The dog was transported to Animal Services for immediate medical attention where a veterinarian said the dog had numerous injuries and was suffering from neglect.

Goodson told officers a friend had given him Chi Chi about a year ago but she had got out of his yard a couple months ago. He had only recently found and brought her back home, said the statement.

He said Chi Chi had given birth to two puppies about two weeks ago, but had eaten them.

He told officers that he "feeds Chi Chi regularly and wasn't sure why the dog was so skinny."

He also stated the dog's injuries were the result of the other two dogs attacking her. Goodson said he chose not to seek treatment for the injured dog, said the statement.

Goodson was charged with one count of Animal Cruelty. He was transported to the Hernando County Detention Facility where his bond was set at $5,000.

Related Stories
5 cats dead after 39 of them found in poor condition at Yishun home, female owner jailed
Girl shows off her 'best dance ever' -- then suddenly throws her 2 cats across the room
animal abuse
animal cruelty
dog
neglected dog eats own puppies