If you ever get stranded between flights, let it be at these gorgeous airports 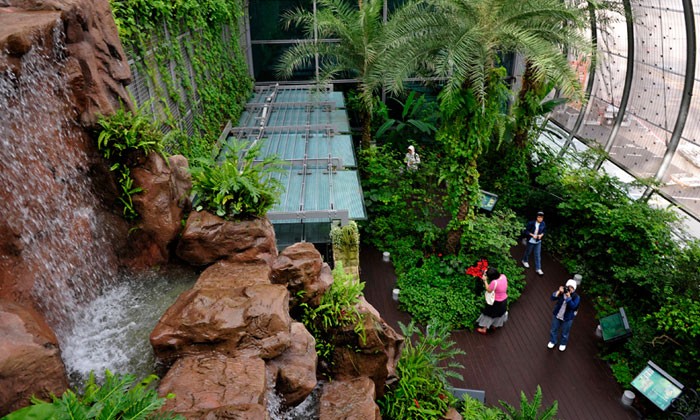 When advertising executive Chia Xia En was planning her trip to Boston last July, she realised the cheapest way to get there would involve an eight-hour layover in Tokyo's Narita Airport.

"I didn't want to splurge on a more expensive flight, so I was resigned to the idea that I would have to sit around and kill time by watching shows on my iPad," the 26-year-old says.

But after doing some research, she realised that the long layover was a secret boon, given that the airport has a slew of facilities for travellers.

The result was a chance to not only go out and explore Narita City for four hours, but also take a shower ($12 for 30 minutes with all amenities provided) and have a meal at traditional sushi restaurant Sushi Kyotatsu - tipped to be one of the best airport restaurants in the world.

Ms Chia says of the experience: "I didn't even notice how eight hours passed. It made me really rethink the idea that layovers are a waste of time."

And it seems that she is not alone. Even as most people continue to gun for the trifecta of perfect air travel - flights that are short, efficient and cheap - there is a small but growing number of travellers who are beginning to embrace the idea that a cheaper flight or longer route could be a valuable option if the stopover is at a good airport.

It seems to be a trend that is in large part linked to the ubiquity of air travel in this day and age.

Singapore's Changi Airport Group noted that about 30 per cent of its patrons are transit passengers - a sizable number, considering 58.7 million people passed through the airport last year.

In bigger connecting cities such as Frankfurt and Dubai, the percentage can go up to 50 per cent annually.

Unsurprisingly then, airports are beginning to take notice.

Ms Angela Gibbons, the director general of trade group Airports Council International, says: "Airports have evolved into complex, customer-focused businesses in their own right and, in many cases, are in competition with one another for passenger traffic.

"From duty free and restaurants to ambience, cleanliness, courtesy of staff, amenities, efficiency and more, air travellers are expecting big things from airports."

For passengers, this has translated into more airports stepping up to the plate with amenities that make stopovers seem like a more attractive option.

And frequent business travellers such as jewellery trader Mansi Roy, 44, welcome that.

"Because information and reviews about airports are so readily available online, it can really sway the route you decide to take to your destination," she says.

From offering shopping belts to aquariums and ice-skating rinks, here are eight airports that might make you rethink taking a direct flight to your next holiday destination.

Children on a layover at Munich International Airport will be kept entertained by its huge playground.Photo: Munich Airport

What is a trip through Germany without a chance to sample its beer? Munich Airport houses the world's first on-site airport brewery, Airbrau, a huge indoor beer garden which opened in 1999 and runs from May to October annually.

The brewery not only has a wide selection of traditional brews, but also offers local food and tours with a brewmaster who will show visitors around and explain the brewing process.

For those who need 40 winks, the airport also offers napcabs in Terminal 2. For €15 ($23) an hour, passengers get a comfortable bed where they can sleep or just relax with music until departure time.

The pods are also set up for work, with an iPhone or MP3 connection and a USB port.

In Terminal 2, there is a play area for children. The highlight of the area is a 6m-long model plane, developed by early childhood education specialists. Its design encourages kids to climb, explore and let off steam before their next flight.

Given its proximity to China and its booming population, it is no surprise that Hong Kong has one of the busiest international airports in the world - and for good reason.

Its terminals are jammed with more than 300 stores - everything from shopping to dim sum restaurants - and there is a wide range of amenities available for passengers on a layover, including landscaped gardens, an aviation discovery centre (pictured), sleep rooms and showers.

Travellers with family can also choose to visit the airport's Imax movie theatre - the country's largest - or play some simulation golf at GreenLive Air, which offers nine- and 18-hole games.

Set against a picturesque backdrop of rocky mountains, this airport is perfect for nature buffs - particularly because of the 114,000-litre aquarium in the departure lounge, which is home to more than 850 indigenous sea creatures.

The airport also has its own wildlife team, with 16 trained wildlife biologists working with the airport to discourage hazardous shorebirds, ducks, geese and herons from remaining on the airfield.

A plus point for those travelling through with a long layover, the McArthurglen Vancouver designer outlet centre (pictured) is just three minutes and two skytrain stops from the airport.

With more than 60 designer brands such as Hugo Boss, Armani and Michael Kors to choose from at the outlet mall, it is a great way to blow off some steam - and some cash.

South Korea's airport features an Instagram-friendly ice-skating rink (pictured) to take a spin in if you have a few hours to spare in Seoul.

Those interested in South Korean culture can also head to its cultural centre and watch a short play or learn to make traditional artefacts such as pencil cases, fans, and "lucky bags" from the faculty of the Korea Cultural Heritage Foundation.

If one has a longer layover, there is the option of the free city tour to explore sights in the city.

But perhaps what make Seoul's airport a layover darling are its many free facilities, including showers, a rest zone for naps, Wi-Fi and massage chairs for the weary traveller.

If you do not have time to make it to London's famed Oxford Street, fret not because a layover at Heathrow might just be the next best thing.

Its new Terminal 5 has a wide selection of shopping options and houses the 11,000 sq ft luxury department store Harrods as well as an official 600 sq ft Harry Potter store (pictured) - perfect for keeping the kids busy.

It offers passengers a chance to enjoy tailored appointments with an accredited stylist in a private consultation suite - free of charge.

Besides shopping, there is a host of dining options - from Michelin starred restaurants to champagne and caviar bars. And for those who would rather pamper themselves, there is the option of a blow-dry at the Bumble and Bumble salon in Terminal 3 or a massage at the luxe Elemis spa in Terminal 5.

Doha's new airport, which opened in 2014, is a major hub for travellers, which means one can anticipate people and flights at all times of the day - and night.

In true glitzy Middle Eastern fashion, the airport, with its five concourses, is enormous and feels very much like a mall, with numerous high-end and mid-tier shopping options for transit passengers.

But one of the real selling points is the airport's many ongoing art exhibitions.

Featuring everything from largescale murals to elaborate sculptures (pictured) by renowned artists such as Tom Otterness and Urs Fischer, scouting out the pieces - which could make for some interesting photographs - could be a good way to while away the time.

Park and fly Visitors to Changi Airport’s Terminal 3 can get close to nature in its Butterfly Garden which houses 1,000 butterflies from 47 different species. Photo: The Straits Times

With its numerous dining options, beautifully landscaped halls, giant slide, free cinema and the world's first butterfly garden (pictured) in an airport, it is no surprise that Changi Airport constantly comes out tops in global airport rankings.

Layover passengers can visit the 1,000 tropical butterflies from as many as 40 species in their lush habitat at Terminal 3 - complete with a 6m grotto-waterfall.

The airport is also well connected by public transport and allows travellers to make a quick visit to attractions in the city.

Changi also offers a free heritage and city tour multiple times a day - perfect for passengers who have at least 51/2 hours to spare.

Zurich Airport in Switzerland is one of the most family-friendly in the world, with family services (pictured) offered in departure areas Aand E.Photo: Zurich Airport

Zurich Airport is a mere 10-minute train ride from the city centre, with trains leaving about every 10 minutes - making it a dream for travellers with a longer layover.

Given its location and trains which run with Swiss efficiency, travellers can venture into the city without fear of missing their connecting flights.

The airport is one of the most family-friendly in the world, with family services (pictured) offered in departure areas A and E.

The facilities include baby care products and a kitchenette with utensils, as well as playrooms with a variety of toys and books, a craft workshop and PlayStations - making a long layover less of an ordeal for families with young kids.

Related Stories
This three-year-old girl made it 4,000 metres up Mount Everest
Watch how China gives the Great Wall of China a facelift for the 21st century
airport
beautiful
creative
amazing
travel
Changi airport