This three-year-old girl made it 4,000 metres up Mount Everest 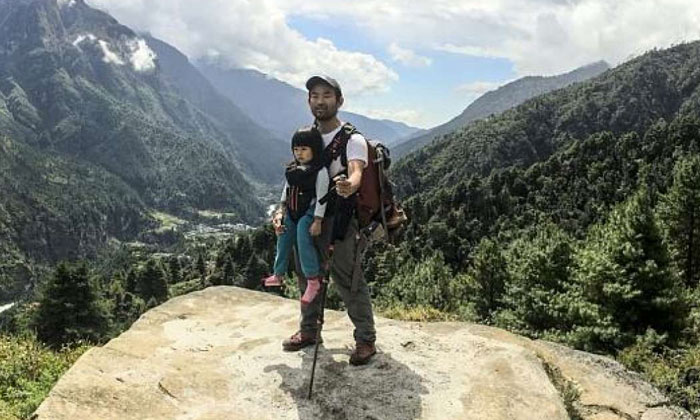 Three-year-old Chow Jiahan walked for up to four hours at a time while she trained with her parents for an ascent to Mount Everest's base camp.

They completed a seven-day trek in the Himalayas earlier this month, going up as high as 4,000m.

Far from suffering, Jiahan was "the healthiest among us" during the trip, says her father, photographer Stefen Chow.

The adults experienced mild headaches or diarrhoea, but the girl had no health problems and ate adult-sized meal portions.

A loss of appetite was one of the symptoms that her parents were looking out for, as it could be a sign of Acute Mountain Sickness.

Jiahan, whom her parents affectionately call Little Chow, did not make a fuss while spending each night in different, non-heated accommodation in temperatures that could plunge below -5 deg C.

The only hiccup was when Mr Chow took a wrong trail one day, which led to their group spending 12 hours in the mountains.

"We tend to overprotect our children. I want to give her a spectrum of experiences," he says, adding that children are more resilient and adaptable than parents may think.

"As parents, we now have a unique experience that we share with her, which was about living in the here and now."

Mr Chow, 36, is an experienced mountaineer who scaled the summit of Mount Everest in 2005.

It was a turning point in his life and the main motivation for undertaking the trip with Jiahan and his wife, Ms Lin Hui-Yi, 36.

"Climbing Mount Everest has remained one of the most significant memories of my life. We always want to share such memories with people who are close to us," says Mr Chow, who was born in Kuala Lumpur and raised in Singapore from the age of two.

The Singapore permanent resident is based in Beijing.

He wanted to share the Everest experience not only with his wife, who set foot on the mountain for the first time during their trip, but also with his children - once they were old enough to communicate their feelings, especially if they are unwell.

He felt that Jiahan could express herself well enough to undertake the trip. His other child, one-year-old son Jiehan, is too young.

Ms Lin, director of the Beijing office of an American market research firm, says: "When Stefen suggested it, I thought it would be interesting. He became a photographer because of Everest. I knew it was a very important part of his experience. Besides, our friend Lulin Reutens was with us on the mountain at the age of 70. If she could, why couldn't we?"

When Mr Chow climbed Mount Everest at the age of 25, he was an engineer and pursued photography as a hobby. After photographing and documenting that expedition, he was so drawn to "photography as a language" that he quit his job and took it up full-time.

He has since won awards for his work, such as the second prize for his portrait of Chinese artist Ai Weiwei in the staged portraits (singles) category in 2013's World Press Photo contest.

When he decided to take his three-year-old daughter along to Everest, his parents and in-laws were "incredulous".

However, he says his family members' disbelief abated when they saw the safety precautions that he and his wife took.

"Our parents know that I am an adventurous person," says Mr Chow.

Speaking to The Sunday Times over the telephone from Kathmandu before flying back to Singapore with his family, he says he chose a "tourist route" to the base camp, which had ample medical and helicopter rescue services.

"The trek itself is basically a walk along a trail that connects villages in the mountains," he says.

He and his wife packed an ear thermometer and a plethora of medicine, in case Jiahan suffered from throat, stomach or other ailments. They even packed formula milk powder for her, which she drank twice a day during their trek.

Mr Chow also did a hiking trip in Taiwan with Jiahan at the end of last year as a "test" for Mount Everest.

At 8,848m, Everest is the world's highest mountain. Mr Chow's target was the mountain's base camp in Nepal, which has an elevation of about 5,300m.

As part of their six-month fitness training for the trip, Mr Chow ran while Ms Lin cycled.

Every two weeks, they took their children to the outskirts of Beijing, which has undulating terrain in areas where parts of China's Great Wall are unrestored.

Jiahan could "do about four hours of trekking before she stopped", says Mr Chow. (In the Himalayas, with its thinner air and more demanding conditions, she usually walked one or two hours a day.)

During these training sessions, which could last eight hours, Mr Chow carried both his children on baby carriers - strapping one in front and the other on his back - to prepare for the trek. During the trek, he carried a 15kg backpack and Jiahan, who weighs 13kg, daily for hours at a stretch.

A sherpa and Ms Reutens, who had climbed mountains with Mr Chow, made up the rest of the family's party.

They were joined by a friend with a four-year-old son for the lower part of the ascent, which started at the town of Lukla in Solukhumbu district, which is situated at an elevation of about 2,800m.

Jiahan was fascinated with the baby animals she saw in the mountains and learnt to differentiate among the yaks, cows and zopkio (yak-cow hybrids) that she came across. She also learnt to identify the coniferous juniper plants and interacted with the children in the villages.

Still, despite the good vibes, they did not make it to the base camp. Mr Chow decided to cut short the trip after they reached an altitude of about 4,000m.

He noticed that the terrain at the village of Pangboche, which they arrived at, was drier than at lower altitudes, and the air would get thinner as they went farther. By about 4,500m, he knew from experience that many climbers and trekkers would start to cough and exhibit other symptoms of altitude sickness. He did not want to risk Jiahan falling ill.

"We decided to take the chips on the table and leave. Everything had been so positive so far."

It does not matter if the toddler cannot remember her mountain sojourn when she grows up.

Mr Chow says: "Whether she remembers it or not, it opened up a new world for her and challenged her limits."