Edison Chen blows up at reporters who follow him at airport 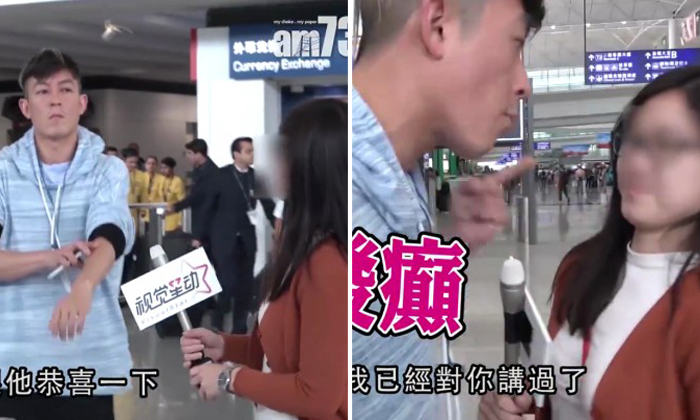 Hong Kong singer-actor Edison Chen was recently seen confronting a female reporter at the Hong Kong airport, but many netizens are supporting him for doing so.

In the four-minute video posted by news site am730, the star appears to be bullying the young woman.

He is seen taking photos and videos of the photographers and asking her whether she "had a brain".

The actor allegedly got upset when he was asked about rumours of his girlfriend Chinese model Qin Shupei's pregnancy.

The 36-year-old also supposedly hurled vulgarities at the reporter and photographers before leaving the airport with his manager.

Here are some excerpts from AsiaOne of the am730 video that was posted on Facebook:

Reporter: Are you here for work or holiday?

Reporter: So will you be staying here for long?

Edison (starts to get annoyed): I don't wish to speak to you, I don't want to scold you, move aside, okay?

Reporter: Can I ask one more question?

Edison (approaches reporter and wags finger at her): You're asking again? I promise you... I promise you! I've given you a chance.

A few minutes later, Edison, who obviously was still angry, takes out his phone and tries to take photos of the reporter.

Edison: You want to shield your face, then don't come out and work. Right, people? I'm human, she's human. You're a reporter? Did you even go to university?

The argument continues until he steps out of the airport and into the carpark.

Reporters continued to film him until he yelled at them: "Was I not polite when I exited just now? You only show the bad side. Did I not tell you to stop asking questions?"

Before the video ends, a frustrated Edison even sarcastically asks reporters to follow him into his car to go on a ride together.

Netizens who saw the video supported the actor and questioned the reporters' need to harass him that way.