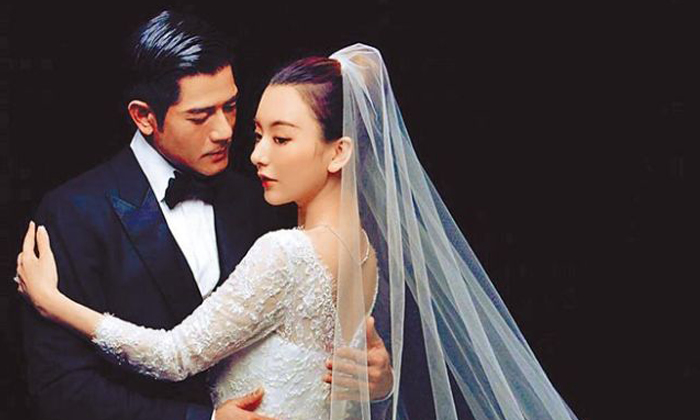 Security was tight on Tuesday at The Peninsula Hong Kong, where the couple arrived by helicopter and avoided the media completely, said Oriental Daily News.

The efforts extended to the official wedding photos that were issued to the press. A first set of pictures showed the groom and groomsmen, but not the bride.

In a photo that was taken by photographer Wing Shya and released later, Fang is in white lace and Kwok's hand is on her waist, as if to shield her from pregnancy speculation.

However, in the evening, a picture of a seemingly swollen Fang in a Chinese wedding jacket and skirt surfaced on Weibo, said Oriental.

Kwok, 51, and Fang, 29, were married by a lawyer at a banquet in the hotel on Tuesday, after dating for less than two years, said Hong Kong newspapers.

Ming Pao Daily News said he got engaged to his Chinese girlfriend in December last year, hoping for his ageing mother to witness his nuptials. The singer and actor, who rose to fame in the 1990s, is the last of Hong Kong pop's four Heavenly Kings to wed.

On the big day, the couple went through Chinese marriage rites in the hotel in the morning, a video of which was shown to guests in the evening.

According to Oriental, the bride's father told the groom at the tea ceremony: "Big brother, when I was a child, I grew up listening to your songs. Now I'm giving my daughter to you. I hope you treat her well."

When Fang's friends asked Kwok to kiss her at the end of the bride-fetching ritual, he begged off, saying he would wait till the civil wedding.

After they were officially married, the groom's eyes were wet and the bride was in tears, said Oriental. He then gave a speech, thanking his mother for raising him.

Although the newlyweds did not meet the media, they sent his manager, lyricist Leung May May, as well as Wong and Tam, to speak to reporters.

Asked about the rumours that the couple are expecting a baby, Leung answered: "I didn't ask. He will say what he has to at every stage. If I really knew Heaven had given him a gift, I would say."

She also explained why her team had picked The Peninsula for the wedding. She said it was the hotel where Kwok had held his 50th birthday party around October 2015 and expressed his wish to meet Miss Right and start a family. Less than two months later, he introduced Fang to the public as his girlfriend.